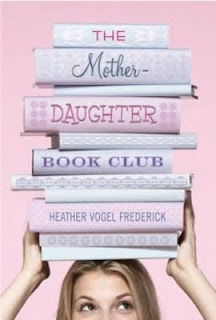 series!   I am also excited to say that I enjoyed it quite a bit.  The book starts off on a very different note than the following books.  Later in the series, Emma, Jess, Cassidy and Megan are best friends, but they didn’t start out that way.  In the first book, Megan is a member of the “fab four” the queen bees of the school who spend a good amount of their time mocking Emma’s hand-me-downs and Jess’ life growing up on a farm.  Megan is the new girl, having recently moved to Concord from California after the sudden death of her father.  Jess and Emma are the only girls out of the four that are already friends.

Much to the dismay of the girls, their mothers decide to start a mother-daughter book club which will begin with Little Women

.  The club is especially difficult for Jess as her mother is a soap opera actress living in New York City and doesn’t have the opportunity to participate in the club with her daughter.  The club leads to tension between the girls which is escalated when Megan’s friends steal Emma’s journal and reads a private poem aloud (in the presence of Emma’s crush, the subject of the poem).  Of course we know (assuming you’ve read my other review) that the girls resolve their problems and end up becoming friends, but it was interesting to see where the girls started and how their friendship grew.

This was a fun book to read and I recommend it and the rest of the series to young girls.  I also suggest that readers of this series read the book club’s books too (I am anxious to re-read Little Women now that I’ve been reminded of it’s wonderful story!).

by Louisa May Alcott
Much Ado About Anne

by Jean Webster
Pies and Prejudice

by Jane Austen
Home for the Holidays