"The Diary of a Wimpy Kid" Series by Jeff Kinney 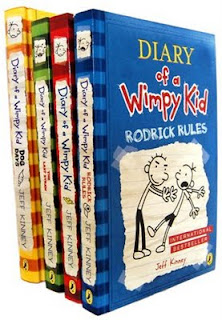 Diary of a Wimpy Kid

by Jeff Kinney is the perfect book series for any reluctant reader (particularly boys!). It is also perfect for the reader that can appreciate a good laugh! Kinney gets right to the heart of the trials and tribulations of life in middle school, but with a humorous twist. I found myself laughing out loud numerous times, and quickly finished the first three books in one evening. Since then, I have immediately picked up Dog Days and The Ugly Truth on their days of release and am anxiously awaiting Cabin Fever (November 15, 2011).

The books, told through Greg Heffley’s diary, follow Greg’s life as he goes through middle school and deals with his older brother Rodrick, his younger brother Manny and his best friend Rowley. Greg is your standard middle schooler; he thinks he knows everything about everything (which he doesn’t), believes that the world revolves around him (it doesn’t) and still can’t handle doing his own laundry.

I can’t say enough that these books are hilarious! I love these books because they can appeal to just about any age group, even though they are written for young readers. I think that these are the type of books that kids can easily enjoy with their parents. If you haven’t already read them you’re missing out!

Diary of a Wimpy Kid


Watch out for the cheese touch!
-Melly