Millions of readers of Little House on the Prairie believe they know Laura Ingalls―the pioneer girl who survived blizzards and near-starvation on the Great Plains, and the woman who wrote the famous autobiographical books. But the true saga of her life has never been fully told. Now, drawing on unpublished manuscripts, letters, diaries, and land and financial records, Caroline Fraser―the editor of the Library of America edition of the Little House series―masterfully fills in the gaps in Wilder’s biography. Revealing the grown-up story behind the most influential childhood epic of pioneer life, she also chronicles Wilder's tumultuous relationship with her journalist daughter, Rose Wilder Lane, setting the record straight regarding charges of ghostwriting that have swirled around the books.

The Little House books, for all the hardships they describe, are paeans to the pioneer spirit, portraying it as triumphant against all odds. But Wilder’s real life was harder and grittier than that, a story of relentless struggle, rootlessness, and poverty. It was only in her sixties, after losing nearly everything in the Great Depression, that she turned to children’s books, recasting her hardscrabble childhood as a celebratory vision of homesteading―and achieving fame and fortune in the process, in one of the most astonishing rags-to-riches episodes in American letters.

Spanning nearly a century of epochal change, from the Indian Wars to the Dust Bowl, Wilder’s dramatic life provides a unique perspective on American history and our national mythology of self-reliance. With fresh insights and new discoveries, Prairie Fires reveals the complex woman whose classic stories grip us to this day. 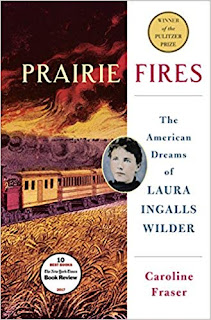 I think it's been well established that I am quite the Laura Ingalls Wilder fan. I just finished re-reading the series again a few months ago and that always revs up my desire to visit each of the places Wilder resided (someday, it's going to happen). This book had been on my list for quite some time and while it was an enjoyable read, I'm not certain it will make it onto my read again list.

First off, this is a heft of a book. I read Prairie Fires on the Libby app and would be reading for quite some time only to discover that I had only made 1 or 2% progress. While this was a bit daunting, I did find the material overall quite interesting, but I can see why others would not. This book goes heavy into the history of the Ingalls family, starting with events before Laura's birth. Additionally, it spends a great deal of time talking about events of the era, not just what was immediately surrounding Laura and her family. This theme runs throughout the book. Personally, I liked this element. As Laura's life spanned from covered wagon to the very beginning of the space race, I felt like those extra details helped give me some perspective. That said, these passages made this book very long. Additionally, quite a bit of this book focuses on Laura's daughter, Rose Wilder Lane. Again, I could see where this would get tiresome for casual readers, but I did find the in depth research interesting (and have also decided that I am not very fond of Rose, but that doesn't effect the quality of this book).

The amount of information presented in the book is enormous. It's clear that Caroline Fraser put a tremendous amount of time into researching Laura and her family. Overall, the writing style isn't nearly as engaging and inviting as so many other pieces about Wilder, but I'm okay with that. Though she presented her family's life to be full of happy endings in her novels, there were many moments in Laura Ingalls Wilder's life that lacked joy. As we all know, much of this was omitted from the Little House series and they were written for children so it makes sense to have the stories reworked to be more cohesive and a bit happier. However, Fraser dug deep and gives details about the Ingall's time in Burr Oak and the struggles brushed over in The First Four Years. I especially appreciated the focus on Wilder's life between leaving De Smet and writing the series, it seems that this era is usually glossed over in other biographies, especially those aimed at younger readers. I also appreciated that she didn't gloss over Rose's existence. While I am not her biggest fan, we wouldn't have The Little House had it not been for Rose. In some ways, I feel that this is the most honest biography I have read as it does acknowledge Rose's influence on her mother's writing.

Personally, I don't feel like this book is going to appeal to anyone who isn't deeply interested in learning more about the life of Laura Ingalls Wilder. The details are a bit too much and the writing a bit too dry. But for those looking for the in depth story behind The Little House books, this book may be of some enjoyment. I have zero regrets in choosing this book and loved that I learned some new things. However, I also wouldn't be surprised if other's decided that this book just wasn't for them.