"The Kidnapping of Christina Lattimore" by Joan Lowery Nixon 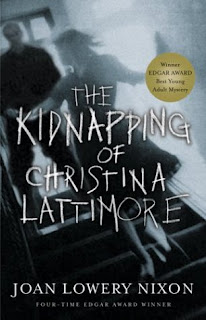 Remember my review of Stolen Children?  Well that book made me crazy nostalgic for Joan Lowery Nixon's The Kidnapping of Christina Lattimore.  Thankfully I was able to score a copy at my library.  The novel opens with Christina getting approached by an odd couple while waiting for a her friend at a local burger place.  It confuses her, but she doesn't spend much time dwelling on it.  She is far more focused on getting the funds for an upcoming class trip. She is very upset when her grandmother refuses to pay for it.  Next thing Christina knows, she has been kidnapped and is being held prisoner in someone's basement.  She ends up getting rescued, but what will she do when she realizes that everyone believes that she was in on the kidnapping?

Sadly, this book didn't hold up quite as well as I thought it would.  It felt a little outdated and the story seemed a lot more unbelievable than when I read this book as a young teen.  The basic idea for the plot is rather interesting, but the way it plays out is unlikely.  It's hard to believe that Christina's parents and grandmother wouldn't give her the opportunity to explain herself but instead immediately believe that she had been involved in her own kidnapping.  It also seems that if they really had thought their daughter had tried to deceive them, they wouldn't have been so quick to welcome her back home.

*Spoiler* Christina does manage to prove her innocence, but that also felt a little false.  The ending was rushed and it seemed to build up to an ending the reader wouldn't be able figure out themselves.  I'm not saying that all mysteries need to be written with the reader's sleuthing skills in mind, but the "villain" kind of comes out of no where.

This book has a lot of nostalgia going for it, but it definitely didn't hold up for me.