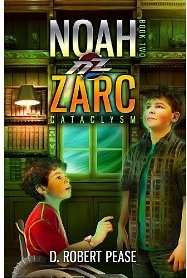 Some of you may remember that I read D. Robert Pease's Noah Zarc: Mammoth Trouble.  Well Noah is back, this time in Noah Zarc: Cataclysm!   This time around, Noah ends up grounded (quite literally) and can only wait helplessly when his parents and the ARC get attacked.  But does he sit around and wait for answers?  Of course not!  That sets him on a whirlwind adventure that leaves him working with Haon, his nemesis from the first novel.  If the two can set aside their differences, maybe they can stop whatever it was that happened that made the planet Earth inhabitable.

I have to say, I enjoyed this book even more than the first one.  I powered through it in only a few hours, just wanting to know what was going to happen next (it also helped that I had a Kindle version this time around.  I think back on the days where I sat a computer reading .pdfs of books and cringe.  I love the Kindle!!).  If I had to find something I didn't like about this book (and this is me being nit-picky here), was that Adina wasn't featured as heavily as I would have liked.  I am always glad when non-girl oriented books feature a strong female character.  So even though her somewhat lacking presence made sense as a part of the story, I was a little sad to see less of her.  I'm hopeful she'll have a bigger role in the next book.

I really did enjoy this book.  I certainly think that it will appeal to middle school readers, especially boys.  I think it will appeal to those that are fans of science fiction and (somewhat) history- though that isn't as big of an influence in this novel.  I'm anxious to read the next book and hope to see it soon (congrats to Pease on completing NaNoWriMo!).

Noah Zarc: Cataclysm, the second book in the Noah Zarc series, is about a boy named, surprisingly enough, Noah Zarc. If you haven’t read the first book, Noah Zarc: Mammoth Trouble, then you probably want to start there. But if you are well-versed in all things Zarc, then take a gander at the description of the next book below. I hope you enjoy reading it as much as I enjoyed writing it.

OVERVIEW
Thirteen-year-old Noah Zarc rockets to Venus in a quest to learn more about his past. He refuses to believe his father is really the monster everyone says he is. Could there be valid reasons for everything he’s done, including abandoning Noah at birth?

While searching for answers to secrets no one wants to talk about, even those that have remained hidden for over a thousand years, Noah becomes embroiled in a mission which could cause the greatest cataclysm in the history of the solar system. And the name, Noah Zarc, might be forever linked to the most devastating crime in humanity's existence, all because he was in the wrong place at the wrong time.

Get your copy today by visiting Amazon.com (available in paperback or as an eBook.) Other online retailers listed below.

CASH and PRIZES
Guess what? You could win a $50 Amazon gift card as part of this special release party. That’s right! Just leave a comment below saying something about the post you just read, and you’ll be entered into the raffle. I could win $50 too by having the most comments. So tell your friends to stop by and comment on this post too! You have until the end of December to comment.
Also, we will be giving away one pair of signed books (Noah Zarc: Mammoth Trouble, and Noah Zarc: Cataclysm) to one winner as well.

THE AUTHOR
D. Robert Pease has been interested in creating worlds since childhood. From building in the sandbox behind his house, to drawing fantastical worlds with paper and pencil, there has hardly been a time he hasn't been off on some adventure in his mind, to the dismay of parents and teachers alike. Also, since the moment he could read, books have consumed vast swaths of his life. From The Mouse and the Motorcycle, to The Lord of the Rings, worlds just beyond reality have called to him like Homer's Sirens. It's not surprising then he chose to write stories of his own. Each filled with worlds just beyond reach, but close enough we can all catch a glimpse of ourselves in the characters.

Discover ways to connect with the author by visiting his site at www.drobertpease.com


THANK YOU! for visiting. And don't forget to comment below for that chance to win the $50 Amazon gift card. And of course head on over to your favorite online book store and buy a copy of Noah Zarc: Cataclysm, for you or for the kids in your life.