**Alright, so I am a little biased about this book (what can I say, my boyfriend's awesome), but when he first told me the synopsis for this novel my reaction was something along the lines of "you have to write this book!  And hurry up so I can read it!"  That said, here is my review.** 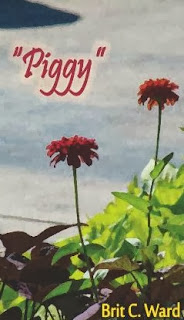 What strikes me first about this novel is that I can't really compare it to anything.  There are certain elements that remind me of other works, but the basis of the story is original (at least to my knowledge).  Justice is the daughter of Paul "Piggy" Peterson.  When she was young, her mother gained sole custody of Justice when she discovered that Piggy was a child molester.  Piggy attempted rehabilitation, but committed suicide when it became clear to him that he could not be cured.  Fast forward a few years to the day Justice meets Emma- the last of Piggy's victims.  Against the odds the two become friends but will speculation and harsh memories tear them apart?

Brit C. Ward's Piggy really isn't too far out there compared to other books.  Yes, the initial concept isn't something I have seen addressed very much in the YA world, but at it's core this book is about two teenagers trying to beat the odds and form a friendship.  In addition to their struggles, there is a little bit of romance, plenty of family baggage, and an ending readers will not soon forget.  I was rather impressed with this novel.  The characters feel very real and don't come off as fake (some fictional teenage girls seem too over the top and exaggerated for me) and seem like the kind of people I would expect to come across in real life.  The situation and scenarios are also extremely realistic.  This is certainly the kind of book that I know I will want to read over and over again.