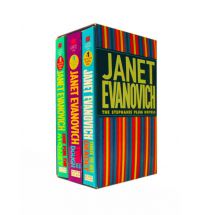 I started reading this series after seeing the movie.  It's not often that I laugh so much while reading a book.  The Stephanie Plum Series by Janet Evanovich follows rookie bounty hunter Stephanie as she desperately tries to bring in those that have skipped bail so that she can afford her rent.  Throw in her zany grandmother, a prostitute name Lula, and her first "bounty" (and first lover) Joe Morelli, and you are in for a hilarious ride.

My mom started reading this series several years ago, so I was somewhat aware of the premise for the novels.  I really had no idea just how much I would enjoy reading them.  I started One For the Money in April of this year and finished Notorious Nineteen very quickly after it was released in November.  I'm a little sad that I got to spend so many months with these characters and now have to wait until another one comes out.  It's been awhile since I have been so caught up in a series (it seems that most "series" I have been reading are trilogies) so it was really enjoyable to finish one book and have another one to start reading instead of having to wait for the next book or to start something completely new.  I really did laugh a lot while reading these books.  They are an easy read.  With the exception of certain scenes, they are mostly light-hearted and just fun.  Something that I particularly liked, was that I could talk to my mom about these books since she is also a fan of the series.  It isn't often that she and I both read (and enjoy) the same books.

I realize that I am probably not the target audience for these books (when I saw the movie, I was probably the youngest person in the theatre...by about 30 years...) but that didn't keep me from liking the books.  If you are a heavy YA reader, these books may not be quite what you are looking for. But you never know, give them a shot (and trust me, you're probably a better shot than Lula)!

Next on my Evanovich list is the Wicked series featuring Diesel and Lizzie.  I am looking forward to these books and hope that I enjoy them as well.