Karen Brewer lives next door to Mrs. Porter, who wears long robes and has wild gray hair. Mrs. Porter has a black cat named Midnight and always seems to be working in her garden. Karen isn't supposed to spy on her neighbor, but she's determined to prove that Mrs. Porter is a witch named Morbidda Destiny!

Mrs. Porter is getting ready to have a special meeting at her house, and Karen is sure the meeting is for witches. Are they going to cast a spell on Karen? Or will she be brave enough to send them away -- once and for all? 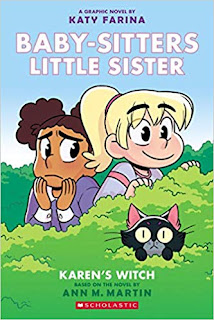 Once upon a time, seven-year-old me went to a garage sale and came upon a box of books: the first 19 books in The Baby-Sitters Little Sisters series and the first Super Special. It took some convincing to get my mom to buy the complete set (and if I recall correctly, the seller wasn’t too keen to break-up the set so if we were going to get them, we had to get them all). In some ways I suspect that she came to realize that this was an amazing purchasing as these were the books that would start my reading obsession. (and what parent doesn’t want their kid to enjoy reading). On the other hand, this purchase was also the beginning of a huge financial investment into the world of Ann M. Martin so she may still have some regrets. Either way, Karen Brewer is the reason I love the written word. I don’t remember how long it took me the finish these 20 books, but I know that before I was done with the second grade, I had finished every BSCLS book available in my personal collection and at the public library. I soon moved onto The Baby-Sitters Club series and have spent almost 25 years with these beloved characters. On occasion, I go through books from my childhood and clear out space by either donating them or exchanging them at the local used book store. But Ann M. Martin’s books are the books that I will never part with.

Nostagia seems to be a huge selling point right now. I tend to get turned off by this (did we really need the 2016 Ghostbusters?). But there is that special place in my heart for any content set in Stoneybrook, Connecticut so I lap up anything released with Martin’s name on it. The graphic novel release of Karen’s Witch is no exception. I think the Little Sister series works better for a re-release than The Baby-Sitters Club. Karen is only six or seven (depending on the book) so technology isn’t as much of a driving force for her books. In the 90s, it was the cool thing to be the kid with your own phone line in your bedroom, so of course Claudia’s personal line was amazing. Now, the concept of four to seven girls gathering three times a week to sit around waiting for a landline to ring is a bit odd. So while I have enjoyed the new graphic novels featuring the BSC, the books haven’t aged quite as well as I would have liked. However, Karen’s universe works really well even now.

Karen Brewer lives most of the time at her mommy’s house and every other weekend at her daddy’s house. A witch lives next door to her daddy’s, or so she believes. Everyone in her family tells her to leave Mrs. Porter alone, but Karen is determined to find out the truth and reveal Morbidda Destiny to the world. She tries to stay up all night to catch Morbidda Destiny flying on a broom, but falls asleep. When she and her best friend, Hannie catch wind of a witches meeting, she becomes even more determined to let all of Stoneybrook know that there is a witch in town.

The graphic novel (illustrated by Katy Farina) hits the same beats as the original book. There isn’t quite as much backstory and character development as I recall, but that seems to be the norm in graphic novels. The style of this book works well with the material and is easy to follow. I would say my only complaint is that some of the characters looked a little different than how they were portrayed in previous BSC books. While this makes sense as they have different artists, I could see this being a tad confusing for readers who aren’t as exposed to the material (kids reading it for the first time, as opposed to those of that grew up with the first run of the material). However, I do see this book appealing to young readers and those little details not being important. My hope is that readers do enjoy this book and reach out for other books by Ann M. Martin. The advantage is that she has written so many books, there isn’t the annoyance that is waiting for a new book to come out and the enjoyment of the material can last. I would recommend this books for girls around six to nine, and especially those that are in the early stages of reading that aren’t quite ready for things such as Dork Diaries or Smile. This book would also be good for families to read together as there is also the lesson behind the story (don’t spy on the neighbors) and can be a good opportunity for family discussion. Either way, this book is worth a read.