What goes up must come down...

Kyra Sanders had a promising career in country music in her teen years. She gained popularity and fame, riding high atop the the charts. Then one deadly accident changed things, sending her spiraling downward to the point she went into a hiatus from music.

Six years later, Kyra's making her return to the music scene. With an album in the works and a new song on the radio, her career is back on track, until a call from Texas with news of an accident forces her to halt her plans.

Matt Greer is working through the aftermath of his ex-wife's abandonment when she chose to leave him and their fourteen year old son to pursue her own musical dreams. He's had enough of troubled musicians and the havoc they bring to his life. Kyra surprises him in a good way, but it doesn't mean he wants anything to do with a singer who comes to town with trouble on her trail.

It's hard to avoid each other in a small town, especially when their families are close. Matt should stay away from the woman who could lead danger right to their town, and it's possible she already has, but he can't help how drawn he becomes to her.

The sparks ignite, but danger lurks in the distance, only getting closer as time goes on. For two people who want different things out of life, it's possible to find healing together... 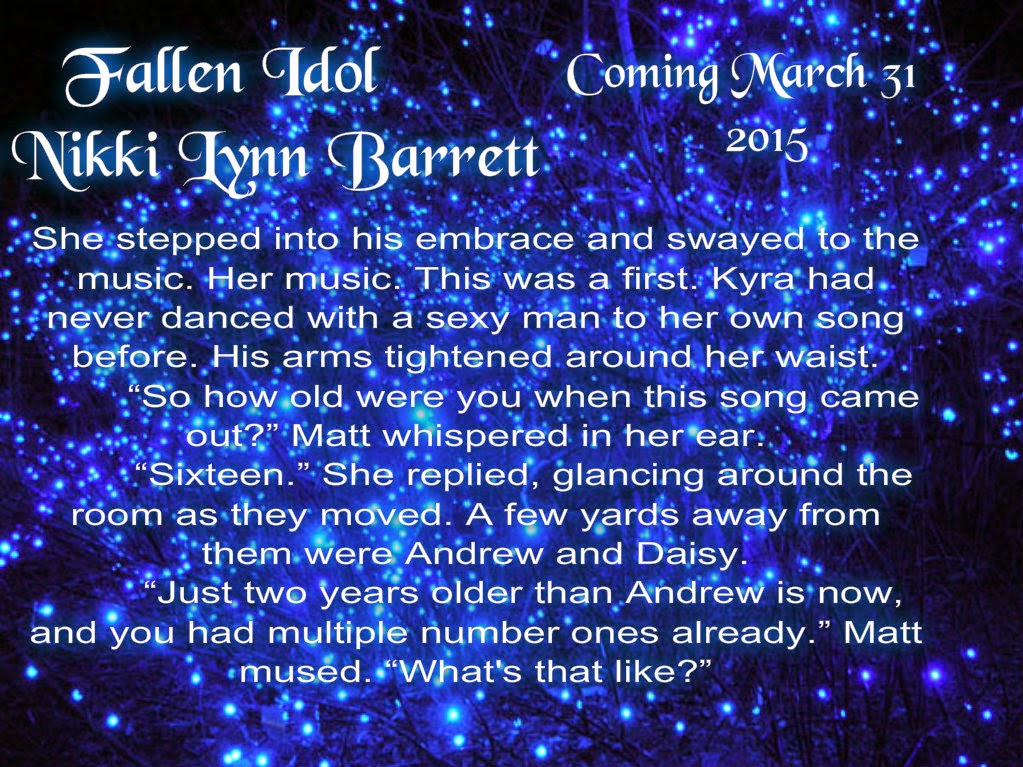 "I know it's a far cry from the parties you're used to." Matt leaned close to talk near her ear.

"That's a good thing," Kyra snapped, immediately regretting it. Was he going on his judgmental kick again?

"Kyra-" He pinched the bridge of his nose. "I misjudge you once, and you always think that's what I'm doing?"

She was about to apologize when the song changed from an upbeat one to a slow country ballad. Kyra laughed. This was her song! "Seriously? Did you put them up to this?"

Matt shook his head. "Nope. I never suggested the music. But since this is your song, literally, I think we should dance." He held out a hand.

She stared down at it. "Are we supposed to dance?" So he knew her song. It surprised her, but made her feel good, too.

"Dancing is permitted. We're here to help out, and there's nothing that says we can't dance. Hey look, Blaine and Randy are out on the floor, too." He gestured. "Come on."

She stepped into his embrace and swayed to the music. Her music. This was a first. Kyra had never danced with a sexy man to her own song before. His arms tightened around her waist.

"So how old were you when this song came out?" Matt whispered in her ear.

"Sixteen," she replied, glancing around the room as they moved. A few yards away from them were Andrew and Daisy. So far, she'd handled the crowd pretty well. Good.

"Just two years older than Andrew is now, and you had multiple number ones already." Matt mused.

She tensed, not sure how to answer.

"Does it bother you that I'm asking? It's out of curiosity. I'm not judging or anything. I really want to know. It's interesting. Here I am, dancing with you during my son's first date. At the age he is now, you broke out in the business. He wasn't even in kindergarten when you had your biggest hits on the radio."

She looked up at Matt. Kyra was tall at 5'8, and Matt had a good four or five inches on her. "It's a feeling I can't explain. I never expected to take off the way I did. I was different as a child. I always had a melody playing in my mind. I couldn't sit still. I'd tap out a beat, or I'd hum. I had song lyrics pop up in my mind that needed to be put to music."

"I know all about that. I remember the first time I met you." There was a twinkle in his eye.

"Yeah, I annoyed you because I tapped out a beat on your dashboard."

"Then you hummed." Matt laughed, then his grin faded. "It wasn't so much annoying as I was nervous about the storm. Adding sounds I'm not used to didn't help."

"And you didn't like me." Kyra wished she'd never said that.

Matt lowered his gaze. "It wasn't quite that."

"No?" Did she really have to ruin the good night by bringing up their awkward first meeting? Why, why, why?

Matt pulled her closer. "Okay, fine. Maybe a little, and I regret it. Let's just say there's a history with me and musicians, and I took it out on the wrong girl."

I'm an avid lover of books. I've been writing as far back as I can remember, completing my first "book" by fifth grade in one of those one subject spiral notebooks. I have a passion for music, photography, jewelry and all things creative. I live in Arizona with my husband and son, but dream of being somewhere much colder and stormier. For now, I'll have to live that life through my characters and stick it out with the summer heat.

MoB Promos
magicofbookspromo@gmail.com
Posted by Beauty and the Armageddon