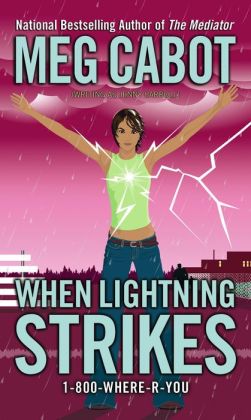 It's Meg Cabot week here at Beauty and the Armageddon.  Basically, I have been doing some major re-reading of my favorite Cabot novels.  If you know anything about me, you know that I love her stuff.  I'm going to do my best to not ramble on like a crazy person about how much I love her books. Here we go!

First up is the 1-800-Where-R-You series.  Meg more or less has one kind of teenage lead; she's never very girly, she's usually some sort of a social outcast, and something major is about to change her life forever.  The main difference is whether or not said lead can kick butt.  Jess, the lead of this series, can do some major butt kicking.  She does so within the first few paragraphs of When Lightning Strikes.  And that's where her troubles begin.  When Jeff Day calls her best friend fat, Jess is left with no choice but to walk home from school with Ruth who is now determined to exercise off her baby fat.  Unfortunately the girls get caught in a terrible storm and Jess is struck by lightning.  This defining moment gives her the ability to find the location of any missing person, dead or alive, anywhere in the world.  Suddenly, average girl Jess Mastriani is involved with the feds, a pissed off stepfather and some not-so-nice folks that would rather see their town rid of those different then them (think the Nazis, but with hillbillies)- not all at the same time of course, this is a five book series after all!  Throw in the hunk Rob Wilkins and you have one of the best book series of all time!

I first came across this series as I was waiting like a crazy person for Princess in Pink to be released.  I found the first book while perusing the book section at Safeway.  I was trying to figure out how I had missed the release of a new Cabot book.  Then I realized that it wasn't technically new but a reprint.  So I bought that one then quickly went and bought the next three online (Missing You wasn't out yet).  Pretty much every time I read these books, I devour them in just a few days.  These are the books that go with me while I am cooking, walking, and the like.  It's books like these that are going to get me in trouble because I'm not paying enough attention to the real world while reading, but they are just that good!

I can't recommend these books enough!  This series is probably the least girly of Meg's books.  Jess describes how she prefers movies with explosions while Ruth prefers those with makeovers.  This book definetly focuses more on the explosions that on makeup or fashion (which may be part of why I like it so much).  Give this series a shot!