"A Tale of Two Proms" by Cara Lockwood 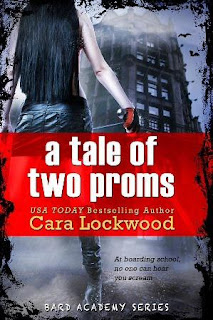 This is my favorite modernization of a classic tale- I love this series!  A Tale of Two Proms is the "most likely last" book in the Bard Academy series by Cara Lockwood.  Miranda has battled Emily Bronte (yes, that Emily Bronte) and an entire cast of literary classics.  Her boarding school is run by people such as Charlotte Bronte and Ernest Hemingway (yup, that Charlotte Bronte and Ernest Hemingway) and has fallen in love with Heathcliff (do you see a running theme here?).  All of this is possible because Bard Academy happens to be the place where the literary and real worlds can coexist- and the purgatory for many a deceased author.  Finally it's senior year and Miranda thinks that her biggest challenge is going to be deciding if she should go to college or stay on Shipwreck island with Heathcliff.  Before she can decide, Miranda and her sister Lindsay are called home on a family emergency.  When they return to school they discover that someone has taken the school- and all the students- and hidden them in works of literature.  It is once again up to Miranda to save the world- both hers and that of classic literature.

I didn't like this book quite as much as the earlier novels, but still felt like it was pretty solid.  I felt like there was a little too much meandering and time wasters within the story.  I especially felt that the final battle to save the school drug out longer than it needed to (I was never bored, but it felt like the characters took their sweet time instead of jumping in to save their fellow classmates).  I did like how the story wrapped up though and am okay with this being the last book (but won't complain if we get a fifth).  Something I like about these books is how Lockwood incorporates elements from classic novels without it feeling like she is forcing these elements into the plot lines.  Too often books like this come across as though the author had a checklist of events from the first novel and simply tell their story so that they can cross items off the list.  Usually they don't feel natural.  Unlike many of these authors, Lockwood clearly had a plan for her characters and knows enough about the novels she references to put them into her story in a way that makes sense and works with the plot.  I also really like her titles!  I keep meaning to read more by Lockwood since I love these books so much. Hopefully I will get around to it this year!
Posted by Beauty and the Armageddon