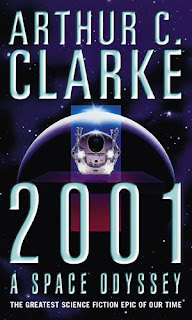 I'm a big fan of hard science fiction. There's something about the honest and serious views of the scientific world that are so fascinating to me, and they capture something that the more popular genres of space opera, science fantasy, and the Michael Crichton-style cautionary tales don't have. It's almost undefinable for me what that thing is. Maybe it's the realism. Maybe it's that these stories often deal more with the reality of how we deal with the changing world.

I love that concept so much. So it's with great shame that I confess I hadn't read Arthur C. Clarke's famous novel until very recently. Awful, I know.

Before I begin reviewing it, one might note (and rather fairly I might add) that this review is pointless. It's a book that was published in 1968, and has run the gamut of reviews, both loving and scathing, and doesn't need yet another one. But I would argue that were in this phase of storytelling where people typically don't take many chances on their fiction. They prefer the tried and true and tested before going to the different, no matter how celebrated or famous. I think, however, that people can be warmed up to newer ideas if there given something of a hint of what to expect. I think younger generations can be shown newer ideas and, in time, warm to them. Heck, as I said, this was the first time I've read the book.

Now, I've seen the movie many times, and am a big fan. I love Stanley Kubrick's style choices in that film and I love that there is nothing on-the-nose about that film. Everything has to be thought of, put through cognizant processes. It's not like a Transformers film where the movie tries to think for you. No, the film 2001 invites you to think for yourself. And I love that.

So, moving on to the book after all this time was a bit of an experience for me. I suspected that there would be differences between the two. And yes, there were, but I think the biggest difference between them wasn't the story changes. They were there, sure, but what set these tellings of the same story apart were the differences in tone.

The film is famous for long stretches of silence. Scenes are laid out before you, pulling you slowly into this universe, increasing both the mood and the constant underlying tension with distinct visuals, sounds, and pacing that results in what is basically perfect filmmaking.

The book did something else; it gave a detailed explanation of everything that was going on. That's not to say that the book thinks for you, because that's certainly not the case. As well, the book could have had a similar tone to the film. But I'm glad that this isn't the case.

I think in some ways, the film almost becomes a thriller. The book really sticks to the sci-fi guns throughout. You're constantly let in on the back story of everything that's going on. In between the sections of story being told, there is the kind of reading that feels almost like a history book, and Clarke brilliantly blends real information with the necessary fictional inventions that were required to fill out the path of man into the further reaches of the solar system.

Like the movie, the story structure is unconventional. Of course, Clarke and Kubrick developed the story together, but I love the way it changes. And in the book, more than the movie, the structure really works well. The movie felt like it had to rush (well, as much as it could rush) to get to the meat of the story. But I feel like prose gets a little more stretching room when it comes to structure, so to my delighted surprise, there were many sequences that were greatly expanded in the novel. The primitive ancestors to man in the beginning of the story are given a great deal of space. And it was fascinating. Clarke's description of the primitive thought processes of these creatures as they stood on the cusp of great change was amazing.

The lead up to the Discovery mission was also great in its expansion. The political environment was an interesting one, painted very well by Clarke, which adds a different kind of tension in the book than in the movie. You're constantly made aware of the issues on Earth and it adds a layer of great depth to the characters' personalities as you can see the issues that influence their daily life and thoughts.

I think my biggest complaint about the book is HAL, and it's probably unfairly affected by the film. I love HAL in the film. He's terrifying, he's interesting, he's one of the best characters on film ever, and he's only ever shown as a red light and a room with large panels. The scene in the film where Bowman starts disabling HAL haunted me as a child, and it's still one of my favorite scenes of all time.

In the book, however, it felt less powerful. HAL didn't have the same character, the same impact, the same intensity that he does in the film. Again, maybe unfair, but I felt that HAL was less important in the book.

The last third of the book is a little long as well, but I did enjoy seeing how a man, now completely isolated and alone in space, with only little contact with Earth, and no real way home, would react. The very idea of seeing the monolith was what pushed Bowman, and the only thing that held off madness.

If you haven't read this novel yet, I think you should. Yes, there are elements that are dated, not even counting the fact that we haven't sent a man past the moon, and it's now 2012, but all in all, it was still an amazingly prescient novel with a great sense of pacing and tone. Will it be for everybody? I can't answer that. But it's definitely an important novel. And one that has really reignited my love for space exploration.

"The thing's hollow-it goes on forever-and-oh my God, it's full of stars!" 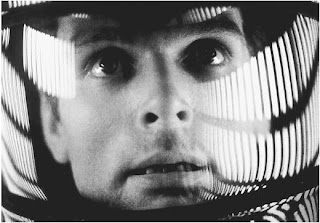 Brit Ward is the author of the novel "Piggy". As well, he is the director of Out of the Void Productions.

Happy Reading!
Posted by Beauty and the Armageddon