"The Pact" by Jodi Picoult 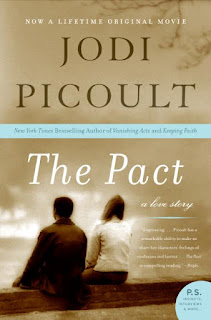 This book is pretty much what you would expect from Jodi Picoult.  A touchy subject, characters experiencing the rawest of emotions, and ans ending that wasn't really expected.  In The Pact we meet the parents of Emily and Chris.  The mothers met shortly before giving birth to their children.  They quickly became best friends- as did their children.  Emily and Chris have been inseperable their entire lives.  They grew up spending more time together than apart.  So it's no surprise when they reach their teen years and become a couple.  However it does come as a surprise when each set of parents gets a phone call informing them of the nights events- Emily has been shot and it appears that Chris was behind it.  Chris claimed that the two of them had made a pact to commit a double suicide, but the evidence doesn't do much to support his claim.  The rest of the book focuses on finding out the truth and is intermixed with periods prior to this horrible night, starting with Melanie and Gus' first meeting leading up to the teens' final night together.

This was only the third Picoult novel I have read (I read Between the Lines right after this one) and I have become accustomed to what I assume to be her normal writing style.  I have found that I typically start to get lost in stories with a lot of prominent characters.  It seems that most authors can only juggle so many characters before their story lines start to blur together.  This is not the case with Picoult's writing.  Even though this book doesn't have only one or two dominant characters, it was easy for me to keep up with who was who.  There is just something about the way Picoult writes that keeps me completely engaged and not at all confused.  She creates characters and situations that are believable (though we may not always want to believe that such situations could exist).  I have made it a point to not go on a spree of reading her books.  As much as I love them, they really put a hold on my emotions.  It is sometimes difficult to grasp everything I am reading and I feel that reading several of her books in a row might be overwhelming.  No other author has done that to me, but I appreciate it.  She is one of those authors that I feel everyone should try at least one of her books.  I will definitely make my way through the rest of what she has written.