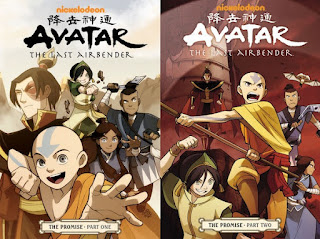 
Avatar: The Last Airbender - The Promise, Part 1  starts where the show left off and then continues a year later.  The characters are presented exactly how they should be.  As I was reading I could hear Toph, Katara, Aang...everyone's voices in my head and it felt like things that the characters would truly say.  The story felt natural.  It also had the same feel as the television show, even though it is a completely different medium (proving it can be done *cough*M. Night Shyamalan*cough*).  I found myself laughing out loud a number of times.

There aren't too many television series that I am really attached to, but Avatar: The Last Airbender is one of them.  It's one of those shows that is almost always in my recently watched on Netflix.  So I was very intrigued by Avatar: The Last Airbender - The Promise.  Even though I don't always want to, I am pretty good about letting go of a series once it's complete.  Sure, I still love it, but I don't deperatly hope that there will be unplanned sequals.  As much as I obsess over Harry Potter, I really hope that Rowling leaves the series at seven books (though dabbling with a prequal does intrigue me).  I hate when any series- books or television- lasts longer than it should.  There comes a point when the story is over, there are no more arcs to complete, no more questions to answer, it's just over.  It pains me when this isn't realized and the series continues but the passion is no longer there.  So it's no suprise that I was a little nervous about these books.


Having defeated Fire Lord Ozai, Aang and Zuko set out to make peace between the four nations.  Zuko makes Aang promise that if he ever begins to act like his father to put an end to it- and therefore him.  Naturally this becomes the plot of the graphic novel as Zuko begins to see the world differently.  He realizes that even though his father's decisions weren't the greatest, they have had an impact on those in the Fire Nation and he isn't sure if he can be the one to undo that.  You can probably guess where the story begins to go from there- of course it means that Aang, Katara, Soka and Toph will do what they do- save the day!

I hate that I read the first two books before the third one was released.  I hate waiting for sequels.  These were an incredibly quick read so I am very anxious to see how it will all end.  These were really the perfect companion to the show.  You don't need to read them to appreciate elements of the show, but they help to quench that thirst for just one more story.  I am very interested to see how everything will be tied together.  Can't wait for October 9th!