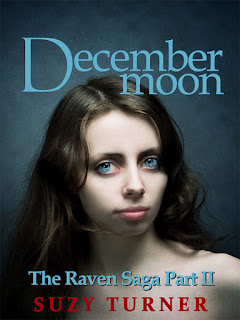 I am sad to say that I didn’t enjoy December Moon as much as I enjoyed Raven.  Suzy Turner's  December Moon continues the story of Lilly and chronicles the life of her best friend December.  When Lilly’s parents disappear and Lilly moves across the world to live with her family in Canada, December is left alone and nearly friendless.  December has spent the majority of her life living with a rich aunt that loves her about as much as she loves her hired help (and that’s not much).  As she nears her birthday things begin to change for December and it’s not long before she’s off on an adventure to discover the truth about her history, her family and her heritage.  Unsurprisingly, December’s quest brings her back to her good friend Lilly.  Lilly’s life continues to change and she is still in search of her missing father.  Things go awry when a mysterious vampire shows up in their small community and locals start dying and disappearing.  It is up to the changelings and other mysterious creatures to put a stop to the murders before it is too late.


I felt that this book mirrored Stephenie Meyer’s Twilight Saga a bit too much (particularly Eclipse).  There are only so many ways to write a unique vampire story and I feel that this genre has run out of suitable plots.  I had enjoyed Raven so much that I had high hopes for its sequel but felt that it fell a little short.  I do look forward to the next book and seeing where the characters end up. In addition, I enjoy Turner's writing style but there were a few scenes that I felt could have been more descriptive (something I am horribly guilty of too) and hope that she puts more time into the writing process of future novels.  I will be looking out for such novels and will read them with high hopes.