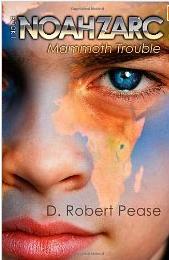 How do you go about marketing your work?

This is a great question, but not the easiest to answer. After all, I'm supposed to be a writer, not a marketing expert, but alas, in today's world we have to be both. My marketing plan, at this point, is to try everything I can. Then just start weeding out the things that don't work. I've created a website. I'm on Twitter. I'm on Facebook. I'm on Goodreads. In fact I'm on so many different sites I've lost count. Basically, since I published Noah Zarc, back in August of this year, I've added another full-time job to my already full plate. I spend a great deal of time on various forums, mostly talking with other authors. I have done several giveaways on Goodreads, as well as some advertising on there. I also have posts scheduled on various Kindle-centric websites beginning next month. One thing I can say is I haven't done many in-person events. I'm just not convinced they are that effective. My goal is to use the power of the Internet to reach thousands of potential readers, instead of a book signing that may only reach a dozen or so. Maybe I'm wrong here, and those dozen readers could be much more devoted fans of my books than folks I meet online, but that is a decision I've made at this point.

Who are your target readers?

Again this is a hard question. During the beginning stages of marketing the book, I've targeted adults with kids. It's hard to try to get kids directly interested, simply because they don't frequently go online looking for books to read. But in the end, I'm looking for kids who love to read. Love the adventure and wonder of discovering new worlds through stories. I've found that boys, in particular love Noah, but girls enjoy the book as well. It was written for kids around 8-13 years-old.

When and where do you write best?

I'm glad you added the "best" on the end of the question. I write all over the place, and whenever I can. I have no set routine. But my absolute favorite place to write is at the coffee shop, in a big comfy chair, with my headphones on listening to the Lord of the Rings soundtrack. I've written a couple of novels this way. There's something about getting out of my house that makes me buckle down and write. And the music keeps the distractions at bay.

What catches your attention when reading a novel?

Wow, another good question. I guess for me personally, I love stories that go somewhere. I can't tell you how many times I've put a book down because it just seems to plod along. If there isn't something happening, some conflict, some action for more than a page or two, then I start to drift. In a broader sense, I love stories with an "epicness" to them. Not that they need to be long, but to me epic means they have a grand theme. The characters affect some kind of change in a larger sense. I believe we are all part of some grand story, and we just need to figure out what part we are supposed to play, and do that. When I see characters who do this, I fall in love.

Boy, you are stretching me here. I think the thing I've learned most from my characters is to just let them be who they are. I love, love, LOVE it when characters say or do things that I didn't expect. I know I'm the one writing the story, but our brains are amazing things. Somehow the subconscious can create these characters that don't exist, and bring them alive. An example is Noah being a paraplegic. I had no intention of making him one. I never even thought about it. But at some point when I was writing the first draft, he basically told me he was.  But I fought with him because I didn't want people to think I wrote him that way
as a gimmick. Just trying to be politically correct or something. So I resisted. I wrote the whole first draft with him having perfectly formed legs. But a voice in my head, his voice, kept yelling at me. Until finally I listened and went back and made him who he was.

I always have a few different books going. I just downloaded the final Maze Runner book, and am dying to dig into that. But I'm also on an Indie Author kick right now, and am excited to find some really good books out there. I just finished up a book called Cassidy Jones and the Secret Formula.  I have to say it was a whole lot of fun.  Head over to Amazon now, and pick it up (after you buy a copy of Noah Zarc, of course).