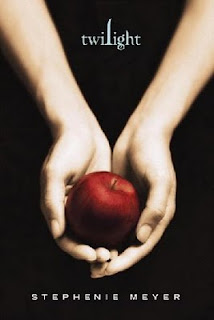 My good friend Jonathan wrote this review of Twilight several years ago. It is always good for a laugh (and yes, I got permission before posting). In addition, below is the review translated into "pirate speak" in honor of International Talk Like a Pirate Day. Enjoy!


“About these three things I was absolutely positive.” First, this is a story of a young, completely normal girl. Second, she is somehow the most sought after human by those with tainted blood. Third, for some reason vampires now glitter in the sunlight.

This book, and the series that it belongs to, has quickly become one the most popular book series since the Harry Potter series. When I was told by countless people about how great this book was, I felt obligated to read it. I should have known better considering the fact that some of those who were big fans of the book told me to skip the first five chapters because they were “pointless and boring.” Now that I have finished the book, I can truthfully say that the rest of the 24 chapters are equally uninteresting.

For any true fans of vampires and the undead, this book can only be described as a disgrace to all that is unholy. The vampire stories of old set the foundation for all that we have been taught about vampires. One key point is that they do not go out during the day because the sunlight will literally toast the skin off of their body and destroy every part of them, thus giving them a “final death.” Twilight twists this well known fact about vampires to say that they just don’t like going outside because it makes them looks funny. Think of it like this, if a vampire in the Twilight series goes outside on a bright, sunny day, all it does is make them look “sparkly.” One huge problem with the sparkling is that the book does not give an adequate description of what kind of sparkle it is. Do they twinkle like a bright star on a clear night, or do they just look like a high school girl who pours glittery makeup on themselves right before prom? I personally like to think of them as looking like a vat of glitter glue has been poured all over their body. What we can be sure about is that sparkling in the sun does not hurt anything but their self esteem. The only reason they avoid it because it makes them look so stupid.


Twilight by Stephenie Meyer
Review by Jonathan "I Be Cuttin' Off Your Peg-Leg" Bacon
Translated by Translate-Pirate.com
“About these three things I be absolutely positive.” First, this be a story o' a blunderbustingly young, completely normal lassey. Second, she be somehow th' most sought aft crewmate by those wi' tainted blood. Third, fer some reason vampires now glitter in th' sunlight.

This book, an' th' series that it belongs t', has quickly become one th' most popular book series since th' Harry Potter series. When I be told by countless people bout how great this book be, I felt obligated t' read it. I should have known better consider'n th' fact that some o' those who were blitheringly big fans o' th' book told me t' skip th' first five chapters cause they were “pointless an' bor'n.” Now that I have finished th' book, I can truthfully say that th' rest o' th' 24 chapters be equally uninterest'n.

Fer any true fans o' vampires an' th' undead, this book can only be described as a disgrace t' all that be unholy. Th' vampire stories o' old set th' foundation fer all that we have b'n taught bout vampires. One o' th' key points be'n that they do nay go out dur'n th' day cause th' sunlight will literally toast th' skin off o' their body an' destroy ere part o' them, thus giv'n them a “final davy jones locker.” Twilight twists this well known fact bout vampires t' say that they just don’t like go'n abroadside cause it makes them looks blunderbustingly funny. Think o' it like this, if a vampire in th' twilight series goes abroadside on a blastedly bright, sunny day, all it does be make them look “sparkly.” One huge problem wi' th' sparkl'n be that th' book does nay give an adequate description o' what blistering kind o' sparkle it be. Do they twinkle like a carbunculously bright star on a unseaworthily clear night, or do they just look like a high school lassey who pours glittery makeup on they's self right b'fore prom? I personally like t' think o' them as look'n like a vat o' glitter glue has b'n poured all o'er their body. What we can be sure bout be that sparkl'n in th' sun does nay hurt anyth'n but their self esteem. Th' only reason they avoid it cause it makes them look so swashbuckling stupid.