From YA Author Trisha Wolfe's Blog:


"Need a Name! Chance to Enter All Contests & Giveaways!

Hi guys! So, I've been thinking that my very vague giveaway name sucks =/ Yeah. Not feeling the Giveaways Galore at all. Because I'm doing the giveaways as a countdown till the release of THE CRYSTAL PENDULUM, I'd like for the name to somehow have something to do with either that, or my book in general. But I'm seriously at a loss. It's hard enough to name characters, a book, towns, you name it. And then naming your own giveaway kind of makes me feel like a tool. I so don't want to be one of THOSE people. So I've come up with what I hope is a fun way to do this!

I'm asking YOU to name the giveaways. And, if your title is chosen, I will enter you in every contest and giveaway from here on out until my book releases! Not only that, but I'll also (as soon as I get this myself) send you a swag pack with a copy of THE CRYSTAL PENDULUM.

I will also give extra entry points to any bloggers that post THIS contest on their blogs! 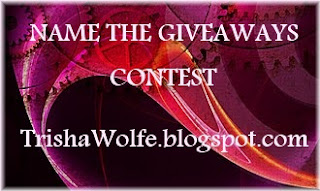 Since no one really knows what the heck the book is about, I'm including the blurb below. I'll also say that it's a YA Steampunk/Paranormal Romance with a kick ass heroine and hot guys. I think that might be all you need to know.


From Goodreads: Sixteen-year-old Dez Harkly is one of the last of her kind—a part of a nearly extinct race of Kythan descended from ancient guardians who protected the pharaohs of Egypt. As Shythe, they must keep their shape-shifting ability and electric power hidden from the humans of their steam-powered world.

It’s the year 2040 and the Shythe Council has lowered their barrier, allowing the Narcolym—the dominant race of Kythan whose Flame ushered in the steam era—to enter their haven. As the Narcolym airships get closer, Dez secretly trains for an attack that her best friend Jace believes is coming despite the Treaty Act. Not only is Dez wary of war, and her growing affection for Jace, but she fears the change her fast-approaching birthday will bring.

When her power rockets out of control, Dez knows she’ll never attend the Shythe Academy with her friends, and worse, her mother’s planning to run. But a Narco named Reese could change her fate . . . if she can trust him. After Dez discovers why the Narcos have really come to Haven Falls, her guarded world crumbles. She’s forced to choose between the race who’s raised her and the enemy she’s feared her whole life.

THE CRYSTAL PENDULUM is an emotional journey of Dez’s struggle to overcome her fear and embrace her power—her destiny.

Good luck! I can't wait to see what you guys come up with! =)"
Make sure everyone checks out her page!
Thanks!