Glad to know I'm not the only one crazy enough to attempt this challenge.  Head over to Sarah Millar's blog and see what she and other bloggers have to say about the good ole BSC. 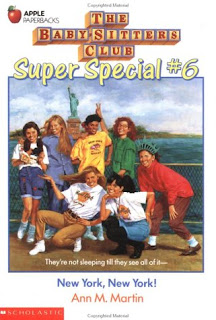 I would say I have a slight obsession with New York and it is all Ann M. Martin’s fault.
Now, I am not nearly as bad as Mary Anne, but there is a part of my heart that is fully in love with The Big Apple. I read this book excessively as a kid.

Want to read more in the BSC Bloggin’ project? Click here for all the posts.
When I was in the fifth grade, I did a report on New York state because of this book (which kinda stunk since I then realized that I had to study the state as a whole, not just NYC).
During the summer between sixth and seventh grade I got the opportunity to go on a school trip to Boston and New York. During the bus ride from Boston to New York, I re-read New York, New York to get myself all revved up for the cool places I was about to visit.
My visit to NYC wasn’t really anything like the BSC’s. I was approximately their age and there is no way I would have felt comfortable running all over the city by myself (not that there was any chance of that happening of course). But that didn’t really matter to me. I still had a blast.
So in New York, New York, the girls are off to Stacey’s hometown during a school vacation (seriously, I wish I had gone to SMS, they never had to go to school).
How cool are Stacey’s dad and Laine’s parents? They gladly put up six girls that they barely know for the entirety of their vacation. Claudia and Mallory spend most of their time in art classes (the basis for the trip), Kristy finds a stray dog and Jessi helps her keep it a secret (and finds her first “boyfriend” — she’s 11, I can’t say that word seriously), Stacey and Mary Anne play baby-sitter/travel guide to two children and Dawn will barely leave the McGill apartment.
The book follows a similar plot to the rest of the Super Specials. Each chapter is narrated by a different girl and has multiple storylines since the girls are usually off doing separate activities. It ties up with them spending a night on the town together before they head back to Connecticut. A simple and fun read (and still one of my favorites!).
Also really cool about this book- the illustrations are done by Ann’s father. I really liked that element, especially because of Claud and Mal’s art class. It made it seem like they were creating the art instead of getting “photos” that often leave me wondering who was holding the camera?


Join the conversation on Twitter by using the hashtag #BSCBlogging.