"The Girl Who Was on Fire: Your Favorite Authors on Suzanne Collins' Hunger Games Trilogy" Edited by: Leah Wilson 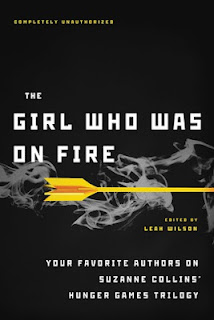 This may be obvious, but do not read this if you haven't finished the series.  Also, be wary of other spoilers.  If you don't want to know the ending of The Chronicles of Narnia series, read with caution.  There was also a spoiler for V for Vendetta and there may have  been one for Buffy The Vampire Slayer (having never seen the show, I am not certain if it was a spoiler or not, just letting you know).

The Girl Who Was on Fire: Your Favorite Authors on Suzanne Collins' Hunger Games Trilogy Edited by: Leah Wilson

I am not the biggest fan of books like this one that consist compilations of essays about a book or series.  They often come across as a way to make profit off of someone else's writing.  However, there were several essays that I liked and agreed with.  The essays cover many topics from the reality television element, to the Team Peeta/Team Gale debate and the politics of Panem.  I wasn't crazy about the political ones, but I think that was more of a personal thing (the best thing about not watching television?  I don't see political ads).  I guess my biggest complaint about this book was the cover advertising "Your Favorite Authors."  I read a LOT of YA fiction and try to keep up with who's who in the literary world but I had only heard of a small handful of these people.  Maybe I'm being silly, but it almost seemed like a bit of false advertising.  Who knows, maybe I am alone in this.

I'm pretty sure that there is at least one essay for everyone.  Clearly this book is going to be more enjoyable to those that are fans of the series but there was one essay that stuck out in my mind because it focuses on how Mockingjay didn't seem as lovingly crafted at The Hunger Games or Catching Fire.  I felt that even though the authors in this compilation are probably fans of the series, they presented their essays (mostly) in a fair and unbiased way.  I know a fair number of people who are not fans of this series, but I think they could read this book and at least see eye to eye on some of the points.

If you are looking for a continuing story, this may not be the book for you.  I know I have picked up such books just because I haven't been ready to let go of a fictional world and am always a little disappointed to find they are never just other authors gushing about how awesome the series is.  I have finally accepted that these aren't the books for that.  But if you are looking for a more in-dept anaylsis of the series, this is the book for you (whether or not you are a fan of the source material).