"The Pregnancy Project" by Gaby Rodriguez 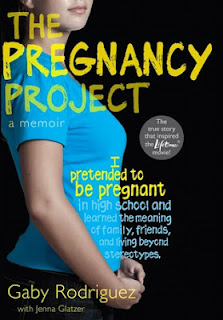 This is a very inspiring book!  Gaby Rodriguez came from a family where it was expected that she would end up a pregnant high school dropout.  So she did what anyone in that situation would do- prove them wrong.  For her high school project she set out to do just that.  Gaby convinced her school to allow her to fake a pregnancy and observe the reactions and response of those around her.  Only her mother, boyfriend, certain school officials knew the truth.  Everyone else assumed she was following in the footsteps of her mother and was going to be giving birth as a teenager.  I hear about this story on the news and was fascinated.  The idea is brilliant.  I couldn’t even begin to imagine the reactions of Gaby’s classmates when she revealed that they had all been a part of her study and that her “baby belly” was plaster and chicken wire.

Though she is a recent high school graduate, I was impressed with Gaby’s writing style.  Even though she didn’t have the best upbringing, she doesn’t show her family in an unpleasant life.  You feel for her and situation and understand where she has developed her motivation to be successful and not fall into the same life as many of her family members.