"Balto and the Great Race" by Elizabeth Cody Kimme 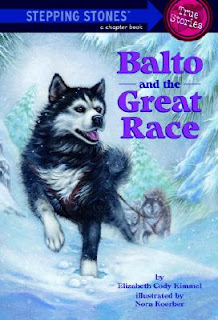 I was rather young when I first saw the movie Balto.  Like many of kids my age, I became rather obsessed with the movie.  What can I say, I am a dog person (on my desk I have several photos.  One is of my boyfriend.  Three are of my dog. Enough said).  It wasn’t too much longer that I found out that the movie is based (based) on true events.  I never did much research into those events until recently.  I came across Elizabeth Cody Kimmel’s Balto and the Great Race while looking for something to read on my Kindle.   This is a beginning reading book so of course it was a very simple read, but in a good way.  It covered the facts of the famous dogs’ journey to Nome, Alaska to deliver antitoxin serum to children sick with diphtheria.  It acknowledged that there were many people and dogs involved and not just Balto.  I appreciated that it was very upfront with the information and didn’t try to spin it in a way that made Balto the only hero.  I didn’t become interested in history until I was in middle school but I think that had I read more books like this one, I would have become interested in such subjects at a much earlier age.  I like that this book is aimed at young readers without being dumbed down.

I think that it would be very interesting to introduce this to a young reader and have them watch the movie as well.  This would start a conversation comparing the two mediums and get constructive thinking started at an early age.  Though I was certainly not the intended audience for this book, I enjoyed it quite a bit and highly recommend it!
Happy Reading!
-Melly