Interview with Victoria Foyt, author of "Save the Pearls Part One: Revealing Eden" 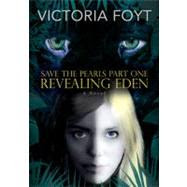 Writing is a kind of meditation in which your characters teach you many surprising things, often holding a mirror to yourself. Eden Newman, the seventeen-year-old protagonist of Save the Pearls Part One: Revealing Eden lives in a world where love is dead and evolutionary climbing is all that matters. Her white skin brands her as a Pearl, ugly and undesirable. In creating her, I stole bits from myself and came to realize that I, too, needed to open my heart to love and stop judging myself based on my appearance. Taking her from this oppressed girl to someone who is willing to embrace everything, her strength, her inner beauty, even love, was a great journey, a revelation, really.

How do you connect with your fans?

It’s such a thrill to hear from my readers! I get a lot of email through my website, which I’m happy to answer. Now, I also have a facebook fan page.

For Revealing Eden, we created an incredible, interactive site where fans have been posting their own “mating” videos or commenting about Eden’s blog posts. With my background as a filmmaker and actress, it was easy to write and shoot ten short videos based on the book. Seeing Eden, who is a gorgeous girl by today’s standards, despair over not being able to find a mate, and facing death if she doesn’t, or watching her desperation as she secretly meets with her dark-skinned Coal boyfriend really captures the future world in which environmental chaos has turned the racial paradigm upside down.

Where do you see yourself in 5 years?

Five years from now, I hope that the Save The Pearls series has reached a wide audience in book and film! I’m halfway through Part Two, Adapting Eden, in which Eden must ratchet up her courage, once again, and take on her enemies, not only for love’s sake, but also for the sake of mankind’s survival. Mostly, I see myself continuing to write, and I feel lucky to do so.

Which characters do you wish were real people?

Ronson Bramford, the male protagonist in Revealing Eden, is really hot, especially when he adapts to a beastly creature. I’d like to feel the thrill Eden experiences when he growls at her.
Posted by Beauty and the Armageddon