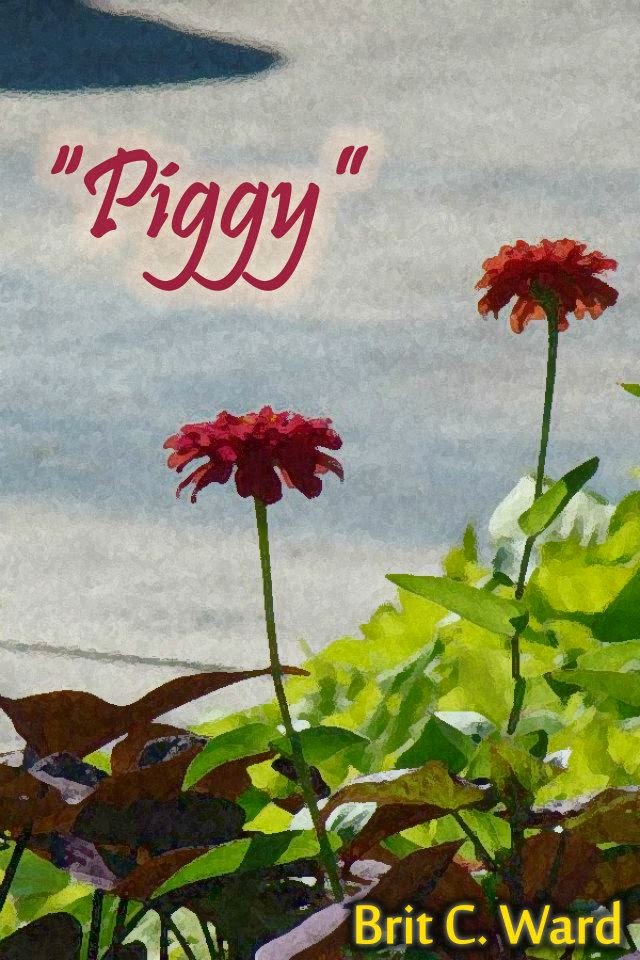 Emma James was the last victim of the child molester named Paul Peterson, aka "Piggy." For years, she has lived with that horrible night haunting her memories. But just as she's coming to terms with her pain, she meets Justice Peterson, Piggy's daughter. Eight years after Paul "Piggy" Peterson's death, Emma is reminded of her past. But is it possible that she's found an unlikely friend in Justice? And who out there would disapprove of this new friendship?

Looking for a new book to read? Brit Ward's "Piggy" is currently available for free on Amazon. This is a great book! Check out the review I did of "Piggy" (and feel free to write one too when you read it) and an interview with Brit. And enjoy and excerpt from the book below:

Chapter One
The James family walked along the beach, young Emma James between her parents, her hands each held in one of theirs.
Emma rushed ahead, letting go of her parents' hands and laughing. Barefoot, she took a big jump, letting her little feet plop into the water. This made her giggle. She enjoyed the feel of her feet hitting the soft, wet sand. She loved the sound of the water rolling up the beach. She could feel the wet sand push up between her toes. She wiggled her toes because it felt like the only thing to do at that exact moment.
She looked back at her parents who both watched her with approving eyes. She gave them a big smile. Emma was only just old enough to understand the concept of a family vacation, but she was enjoying every minute of it.
She couldn't imagine being sad right then. She wanted to live on the beach, even though she knew she couldn't. If she could, she would have a big house, so huge that she could have a gazillion parties in it, not just her birthday party, but a birthday celebration for everyone that she knew, and hopefully they could have a party every day. They would just fill the empty days when there weren’t enough birthdays to go around. They could all go to the beach and run around after cake and presents. It would be amazing.
Oh, well, she thought. She would enjoy the beach while it lasted. She would enjoy being in one of the most beautiful places in the world. Or at least that she'd seen for all of her six years. Nothing could go wrong on a perfect family vacation.

“Please don't cry,” he says to the young girl. He moves to sit next to her on the bed, but she sits absolutely still. She tries to go to find a happy place in her mind. She tries to remember what the beach sounded like. She loves the sound of waves and water. She likes the size of the ocean, how much space it had.
Drip.
Drip.
She wishes he would turn the faucet off completely. The sound makes her fear worse.
He puts his hand on her shoulder and she wants to throw up. She wants to scream, but doesn't. She wants to call for mommy and daddy but they aren't close enough to her to save her. No one can save her.
Drip.
She’s confused because she knows all of this is wrong. But she doesn’t know how to act.
Drip.
*    *    *

His name was Piggy. His actual name was Paul Peterson, but no one remembered where the name Piggy came from. The thought was that, in high school, someone started calling him Piggy and it stuck. His only memory of this was that it might have had something to do with Lord of the Flies. Piggy was overweight like his namesake in the book, so he figured for the better part of his adult life there might have been a connection.

Of course, he had a hard time imagining any of his high school class actually reading any of the assigned books in English. Most of them engaged in the sort of activity and behavior that he himself was never able to do during that stage of his life, even if he'd wanted to. But Piggy never watched his fellow students with any need or desire to join in their youthful depravities. He'd save his own problems for later in life.

“We can be friends. Good friends. Don't you trust me?” She shakes her head.
He looks angry for a moment, but he doesn't yell. Instead, in this small room that seems too small for a man as fat as him, he gets up and walks to a different wall. He puts his hand on the wall and looks down at the floor.
Is he crying?
She still doesn't look at him. She doesn't want to. Because she knows everything that has happened was horrible.

Piggy had a daughter named Justice. There were pictures of he and baby Justice, along with his wife, and from all accounts they must have been a happy family. He and his first wife, Annabelle, were married only a short time before he'd commit a horrible act that led to their divorce, when Justice was still very young.
Much later, he'd start seeing a woman named Suzanne. There was a point, while with Suzanne, that Piggy would work hard to try and fix his life. But it never worked. His life would end when he put the barrel of a gun in his mouth and pulled the trigger.

“You're such a pretty, little girl.”
He keeps saying it like he’s he trying to remind her to make her feel better.
“You didn't do anything wrong, you know? You're so full of life and so amazing. So you shouldn't cry. You should be happy.” He keeps talking, but she doesn't stop crying. She is scared of him and hurt and scared of what just happened. She wants to leave so very badly.

He had asked her, “One more time?” He was pleading.
She didn't answer, and now she sits very still. She waits for him to do something. She hopes he doesn't. He's crying now. He lays down behind her as she sits on the edge of the bed.
Another drip.
One more.
The final one hits and she's suddenly filled with an urge that takes her.
She runs. She gets to the door of the small trailer. She swings the door open and runs outside of the trailer, tears running down her cheeks, fear filling her chest.
She hears him scream out for her.
She doesn't turn.
Don't turn around.
She hears him stumble and curse. But she doesn't stop until she finds herself outside of the trailer park and into a residential neighborhood.
There are no cars. There are no people walking around. No one to scream to. But she's not sure she can scream. She hurts, not just in her throat but all over her body. She tries not to think of why.
Instead, she keeps running, hoping for something that will help her. She can't hear that man behind her anymore, but she's too scared to stop. To even turn and see.
But eventually, she can't help herself. Her breathing is burning her insides. She's tired. She can't run anymore.
She finds a dry ditch and curls up in it. She cries until she can't anymore. She can't sleep, so she just lies down until a bit of the sun starts to peak its face over the edge of the horizon. But it's still dark enough that she doesn't really notice anything going on around her.
She doesn't see the police officer until his flashlight beam hits her. She doesn’t feel him pick her up and carry her to the police car as he calls in for an ambulance.

“People can change. But they usually don't.” He’s whimpering to himself, all alone now.

©Copyright 2012 by Brit C. Tullis.
Posted by Beauty and the Armageddon