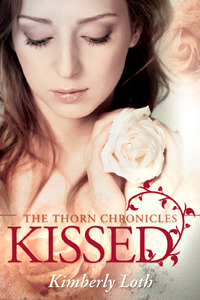 Tell us about Kissed.

Kissed is about a sixteen-year-old girl, Naomi, who is rescued from her impending nuptials by the mysterious Kai who sends her off to Vegas with a sweet kiss and a promise of only a short time apart. But there Naomi meets Puck, a boy with wine colored hair and kisses that rival Kai’s. Soon Naomi is swept into a glamorous world where kisses hold power and not is all is at it first appears. Soon she must choose, freedom but heartache or love and captivity.

How did the book's cover get chosen/designed?

I worked closely with the cover designer. I wanted something with roses and an innocent girl. The designer took it from there. I think she did a fantastic job.

Do you have a favorite quote from Kissed? Can you share it with us?

I have several.  Here are a couple.  One is when she meets her best friend for the first time.

Her heart-shaped face was surrounded by hair that burst from her head like orange corkscrew noodles and her baby blue eyes sparkled with excitement. She looked a little crazy, but then I wasn’t naturally a good judge of character.

The second one is Naomi talking about her roses.

My hands bear the scars from thorns. But they are worth the pain, for from pain comes beauty.

When did you decide to become a writer?

I’ve always been creating stories in my head. I thought that was normal, that everybody did that. In my late twenties I felt like something was missing in my life. Which was crazy because I had a great job, husband, and kids. I wanted something more. Something that was just mine. I’d never been particularly good at art or music, so I tried my hand at writing. Now, eight years later, it’s not longer just mine, but I’m completely satisfied with my life. Writing filled that hole.
Any tips on how to get through writer’s block?

Take a bath or a shower. Go for a walk or a drive. Watch a movie or read a book. Meditate. Write anyway, even if its crap (writeordie.com is fantastic for that.) If it's a scene that is holding you back, jump to the next scene and come back to it later.

I just finished and ARC of More Than Music by Elizabeth Briggs. It was fantastic and will be released on June 17th. I’m starting Dark Promise by Julia Crane and Talia Jager. My daughter read it and told me I had to read it.

About Kimberly Loth
Kimberly Loth can’t decide where she wants to settle down. She’s lived in Michigan, Illinois, Missouri, Utah, California, Oregon, and South Carolina. She finally decided to make the leap and leave the U.S. behind for a few years. Currently, she lives in Cairo, Egypt with her husband and two kids. She is a high school math teacher by day (please don’t hold that against her) and YA author by night. She loves romantic movies, chocolate, roses, and crazy adventures. Kissed is her first novel.