Interview with I. L. Williams, Author of "Bing & Nero" 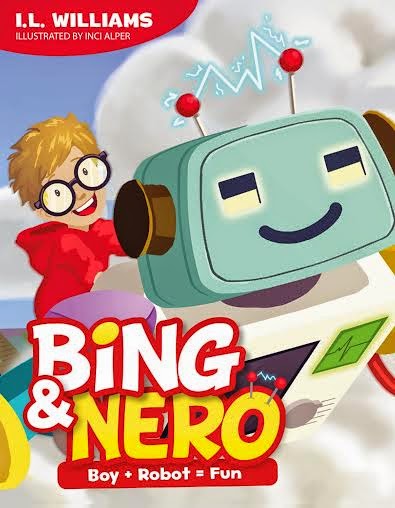 Bing and Nero is a story I made up to tell my 5 year-old son (who is crazy about robots!) at bedtime. He wanted to hear it over and over again, and asked a lot of questions about the characters. A few of his friends also liked the story. I decided to find an illustrator in order to make it into a book I could give him as a Christmas present. When I saw Inci´s (the illustrator) pictures, I began to see this could really be a proper book many other kids might enjoy.


Do you plan to write more about these characters or more in the universe you have created?

I have already written the second book and I am busy telling the third story to my son in order to develop it to his satisfaction. When he won´t allow me to change the story anymore, I know it is probably right.


What was the hardest part of writing/publishing this book?
The hardest part was figuring out how to self-publish efficiently and at low cost. There are a lot of options and a lot of potential traps --especially people and organizations offering services that you don´t need or that are overpriced. I got very lucky and I joined a group of self-publishing professionals (Alliance of Independent Authors) who provide a wealth of solid information.

What do you do besides write?
I am a communications and marketing professional and have made a career out of corporate writing. Creativity in that arena really helps. Writing professionally every day also makes me more efficient when I write fiction. I know better than to wait around for inspiration.

What are you currently reading?
These days I am revisiting a lot of old children´s classics. These stories that have charmed kids for generations have a lot that can be learned to make you a better writer for kids. "Eloise" by Kay Thompson and "Oh, the places you´ll go!" by Dr. Seuss are next to my computer now. And I have to say that Neil Gaiman is a magician with words. I am revisiting his work all the time.

One of the nicest reviews I have received so far on Amazon (excerpt):


There are a lot of kids out there that do not have anyone to play with. A book such as this one opens a child’s mind and allows their creativity to soar beyond their imagination. Who would not want to have a robot as a friend? I know I would.

In addition, as an early childhood educator, I believe this book would be a great asset to the classroom and to any lesson plan. A whole lesson plan can be done around this book. -Evelyn G.

Bio:
Ingrid Williams is a native Californian who now lives with her family in Norway. She has had a successful career as a financial journalist for Dow Jones Newswires and as a copywriter for one of the largest creative agencies in Scandinavia, among other positions in the world of corporate communications. She is a recipient of the Humphrey´s Fellowship in Writing at Columbia University in New York. She created "Bing & Nero" for her 5 year-old son, who has a serious robot obsession that shows every sign of continuing for quite some time.

About the illustrator:
Inci Alper loves to tell stories through her art. She works as a game artist and resides in the beautiful city of Istanbul. She is a daydreamer and she likes to escape into the world of video games for hours. She also secretly wishes she had a robot friend of her own. 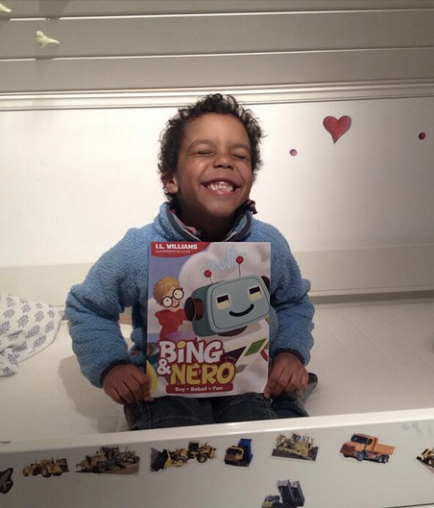 Bing wants a dog. But his mother says a dog is out of the question. What´s a young boy in need of a friend on a boring Saturday morning to do? Why, make his own friend! He heads right down to the family basement to collect boxes of junk, old toys and discarded household items.  And he sets to work. Hours later, and after a few wrong turns, he has built his own robot friend. And what a friend his new creation is! The product of Bing´s rich imagination and household junk from the basement, Nero is a metallic wonder. From the moment he is switched on, the house is filled with fun! And when they take to the sky for a late afternoon flight, boy and robot are in for a joyous ride that celebrates their friendship.  Tucked into his bed that evening, with Nero plugged in to recharge for the next day´s fun, Bing decides that having a robot is actually even better than having a dog.

*This book is the first in a series of books about the active adventures of boy and robot. I have written the second book and am now at work on the third.