"Tales of a Sixth-Grade Muppet" by Kirk Scroggs 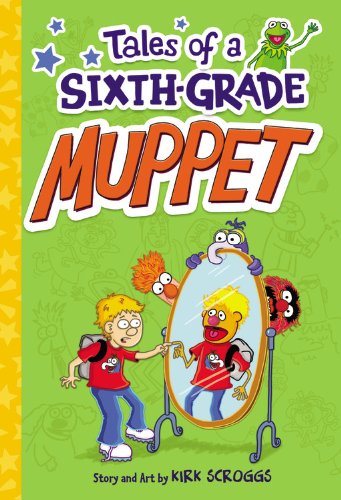 Fans of The Muppets will get a kick out of this book. Danvers is a pretty typical kid though his little sister is more annoying than most sisters and his hero is Gonzo. But other than that, pretty normal. He tries auditioning for the upcoming talent show, but is beat out. He's crushed. The next morning, something very strange happens. When he wakes up his skin is orange and fuzzy, his arms and legs are floppy, and his nose is red- he's been turned into a muppet! Suddenly his world is turned upside down and before he knows it, he is an intern at the Muppet Theater where he gets to work with Kermit, Fozzie, Animal and his hero, Gonzo himself!

I picked up Tales of a Sixth-Grade Muppet because it was about The Muppets. I'm not sure if books are the best medium for these characters even though the book was good. I don't think that those that aren't aware of the characters will get much out of the book. It seems to me that the jokes with the Swedish Chef and Beaker translate much better in a audio/visual medium instead of through text. However, there are lots of other jokes in this book and there's plenty to keep adults entertained as well as kids (I think this would be an excellent book to share as a family- and a great way to introduce said kids to some amazing Muppet movies). It has a Wimpy Kid element to it as well in that parts of the books are told in kid-like drawings. This is also a good thing to point out to kids who might pick it up for that reason. I see this book appealing a little more to boys, but there is nothing in it that is going to really be a turn-off for girls.  Basically, this isn't the best book I've read lately, but it was still quite entertaining and I think that Scroggs has done the best job possible translating these characters into the written medium.

By the way. Did you know the Muppet Babies is on youtube! Totally watching it as I write this review.