"Don't Even Think About It" by Sarah Mlynowski 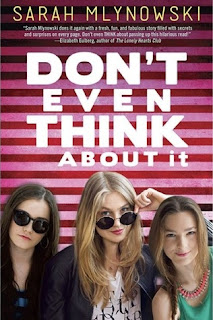 I think if anyone but Mlynowski was the author of this book, it would have been a little too out there for me. But since Mlynoski has shown that she can handle teenage witchcraft and sending kids on journeys through magic mirrors, a contaminated flu vaccine that gives an entire homeroom class the power of ESP isn't too much of a stretch. I love how this book is narrated. It isn't told through the eyes of just one person or even a small handful of characters, but is instead told by the class as a whole. We find out how they gain these powers and how their lives begin to unravel because of it and how they begin to cope.

The students in room 10B don't expect anything out of the ordinary to happen when almost every one of them gets their flu shot. But slowly they start to hear things no one is supposed to hear- the thoughts of those around them. It starts with Olivia who passes out in front of the class because of it. Soon the other teens realize that nothing in their minds is safe. They all know that Mackenzie cheated on Cooper, that the marriage of Cooper's parents isn't as solid as he thought and that Tess is actually in love with her best friend. Of course readers will question, why don't they seek medical attention? No worries, the book covers that (in a way that pleased me quite a bit). I didn't feel that there were loose ends with this story or major plot holes (assuming that you can accept the unlikeness of the plot itself).

The more I read of Sarah Mlynowski, the more I love her writing. I often struggle when there are a lot of characters in a novel and sometimes find myself getting them confused with each other. However, that is not the case at all with Don't Even Think About It. Each character is crafted in such a way that it was always easy for me to remember who was who (no easy feat considered she doesn't spend ample time on back story, but instead crafts strong characters from the beginning). Also strong in this novel was how I felt for the characters and that I continuously rooted for their success. So far, this is the most unique book I have read in 2014, a major plus since it seems that plots are getting reused at a quicker rate any more. Readers of my blog probably already know that I pretty much always recommend Mlynowski's books and this one is no exception. If you like YA that has some mystery and romance, but also allows you to think while you read it, this is the book for you!