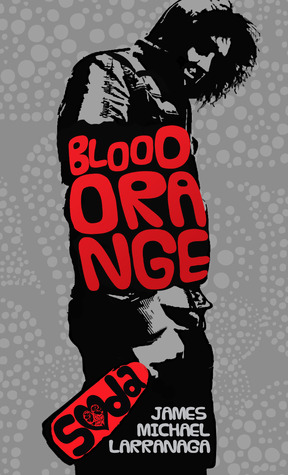 Finally! A vampire novel I actually like! No one in this book glitters or is overly whiny/pathetic, but instead the vampires in Blood Orange Soda kinda rock (and I don't just mean literally). Darius' life isn't always easy. His father passed away a few years ago and his mom has to work really hard to support their family, but she is fighting a disease that is likely going to kill her. On top of that, he is often the target of the school bully. Though he has the support of his best friend's Angel and Weezer, Darius is tired of being pushed around. He finally comes to the decision that he is going to make the transition to become a vampire. On top of this, smoking hot new girl Shelby has just started at his school and Darius can't help but be attracted to this soon to be vampire.

So things I really liked about this book- Darius didn't sit around the brood for the entire novel. He had a goal and sets about doing (transitioning to a vampire, but using a sped up process). He actually cared about his family and did all that he could to help cure his mother. The characters were well-rounded and didn't just appear when it was plot important. The girls didn't just sit around letting the boys have all the action. In case you can't tell, I am not a Twilight fan, so going into this book I was initially worried that it would be just another vampire books riding on the Edward and Bella coat tails. Thankfully, this was not at all the case. There were some parts of the book that could be improved, for instance, I wish that there could have been some better resolution than the characters fighting, but I know that sometimes you gotta do what you gotta do. I won't spoil, but I thought that the ending was brilliant (again, no spoilers, but it really caught me off guard) and not at all what I expected. I've noticed lately I am getting better at predicting how books will end so I really enjoy when I come across a book that I don't figure out right away. I don't see a lot of potential for a sequel to this book, but I think that Larranaga has created a strong enough world that he could write more about these characters if he so choose (Mr. Larranaga , on the off chance you are reading this, I personally wouldn't mind seeing something from Angel's perspective).

If you like Twilight-esque novels that involve insane love stories and love triangles, then this book probably isn't for you. But if you are looking for a vampire that actually uses that fact that they are a vampire to their advantage, then you will probably enjoy Blood Orange Soda.