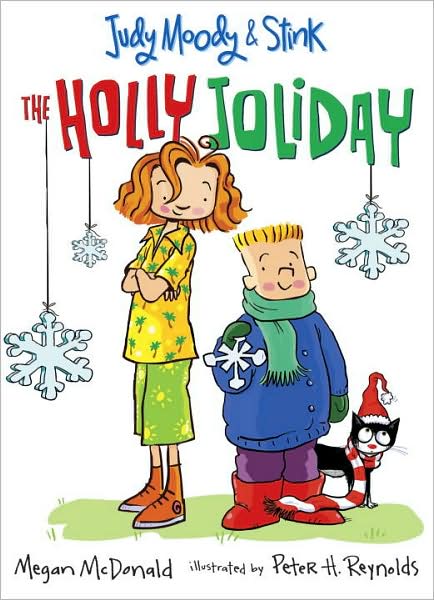 My first Judy Moody book! Normally I don't let myself read a book in a series without reading the first book first. But I've learned that with a lot of books aimed at kids that the plots are usually set up so that they don't depend on the books that came before it (usually, not always), so I took a chance and read this book. And guess what? You can read this book without reading the others. I am going to assume this means that other books in Judy Moody and Stink universe can stand alone too, but I can't say that with certainty, having only read the first book in the Stink series. Anyways, to the book!

In The Holly Joliday, Judy and her brother Stink are excited for Christmas. One day, Stink meets the new mailman named Jack Frost. This is quite the coincidence as all Stink wants for Christmas is snow. Poor Judy feels bad for her brother as there is no way anyone can make his Christmas wish come true. But Stink pays her no mind and is completely obsessed with the idea of snow, so much so that this book invloves him dressing up as a snowflake. This book involves other Christmas goodies such as Judy's toilet paper wish list, a Hawaiian Twelve Days of Christmas and a very special surprise at the end of the book.

This book was a lot of fun. I liked that is was a crossover book so fans of Judy and fans of Stink can both enjoy this book. I think it's a great read for kids that are anxious for Christmas and a must have for any Megan McDonald fans.