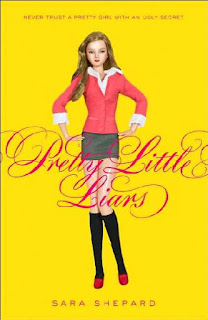 I have heard great things about the Pretty Little Liars series by Sara Shepard.  However, I'm not sure if they are quite for me.  I plan on giving the next one or two a shot, but based on how I felt about the first book, I may not see this series out.

The first book opens with a sleepover that goes horribly wrong.  Alison leaves the sleepover and never returns- anywhere.  The novel then picks up three years later. Hanna, Spencer, Aria and Emily have grown apart since Alison's disappearance.  The majority of the novel focuses on each girl individually and they only reconnect at the end of the novel when they find out that all are receiving messages from someone identified only as "A" and that someone knows all of their secrets.  I thought that the idea for the novel was kind of interesting.  However, I felt like there wasn't quite enough character development for each of the girls.  I found myself referring to the summary several times just to keep straight who was who (granted, I am used to stories that have multiple points of view having both male and female characters- maybe having four female leads was just too much for me).  They each had unique storylines, but I couldn't help but feel like they were just one person split into four separate stories.  And each of them had a little bit too much drama for my taste.

I am a little intrigued and would like to see this story out- and find out who "A" is, but I get the feeling that these books may be a little too soap opera like for my tastes.  It was nice to see that Shepard is not afraid to tackle difficult topics- missing persons, bulimia, underage drinking, are just a few things included in the first novel.  I certainly see the appeal of these novels and am really going to try to keep reading them, but we shall see.