"The Boxcar Children Beginning: The Aldens of Fair Meadow Farm" by Patricia MacLachlan 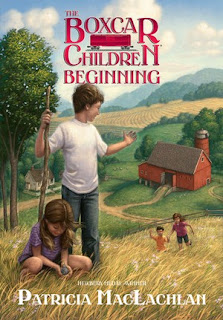 ***This review may contain spoilers, depending on if you have read the original series or not, or just how much you don't want  to know plot details of this book***

When it comes to movies, I am pretty much over the sequel, prequel, and reboot trend.  Occasionally there are those that fit this category that are exceptional (The Dark Knight Rises, Toy Story 3, and little else), but overall I am a little sick of it.  Now it seems that I am becoming a little wary of books that fall into this category as well.  I had so much anticipation for Patricia MacLachlan's The Boxcar Children Beginning: The Aldens of Fair Meadow Farm, but I guess I didn't think it through.  I thought fondly of the hours I spent in the company of Henry, Jessie, Violet, and Benny (and Watch, I can't forget Watch) that it didn't really occur to me that I wasn't interested in what happened before the story started.  I didn't want to think about why the four started their journey or about how they lost their parents.  Initially the thought of a Boxcar Children prequel was amazing, but having read it, I kind of wish that the series had been left alone.  There wasn't really anything bad about the book, but I think it would have been better suited as an original story and not as part of another storyline.  What I think surprised me the most was that I felt so strongly about this even knowing that this wasn’t the first Boxcar book to be written by someone other than Gertrude Chandler Warner.  It just didn’t give off the same feel as the rest of the books.

The story takes place in the months before the original novel.  The four Alden children are living happily with their parents on their family farm.  Though it isn't directly stated, the story appears to be set during the Great Depression.  Many families are struggling financially but the Aldens seem better off than most.  The majority of the novel is focused on the friendships that develop when they take in the Clark family when they become stranded during a snowstorm.  For the most part it's a sweet story.  There is little conflict which is suitable considering that this is a book for young children.  My two biggest complaints about this book were its length and the build-up of the story.  I read this book on my lunch break- it took my about 30-35 minutes to polish off the entire novel.  Now I know I read insanely fast sometimes, but I couldn't help but feel that this was too fast.  The margins were kind of wide.  There just wasn't enough to this book for my enjoyment.  As for the story itself, we all know how the book is going to end (to some extent at least).  We know that something is going to happen to the Alden parents and that the four children are going to start off on their own so as to avoid being put into the custody of their grandfather.  I guess I expected there to be a little more focus on this element.  Instead it felt like the dislike for their grandfather was shoehorned into the story as an afterthought.  It didn't really come across that the kids were afraid of their grandfather like it did in the first book (or maybe I am just a little picky).  Also, the children's decision to leave and be on their own after their parents death also felt a little forced.  The kids seemed too calm and accepting of the situation and immediately made a plan to leave.  What got to me even more is that there were adults who knew that the children would run away.  The entire ending was just very unbelievable to me.

It’s very likely that I went into this book with expectations that were too high.  Having loved this series for around 15 years, that seems the most likely.  I do think that if this were a stand alone book I would have enjoyed it more than this book that was based around already established characters.  I won’t be doing very much to get others enthused about reading it, but as always I feel that it is up to the reader up to decide what they think.