"Pride and Popularity" and "Northanger Alibi" by Jenni James 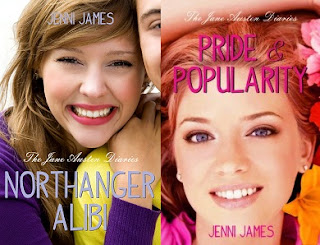 I have been really torn about writing this review.  First, these books were sooo not written with me being the target audience (and that's okay) and second, they feel like they still need a bit of editing.  But at the same time, I think that the author, Jenni James, is one of the most passionate writers I have ever met and her love for her books makes me forget that I wasn't wild about them.

I first discovered Pride & Popularity on some random blog (sorry, but I can't for the life of me can't remember which one) and was intrigued by the idea of a Pride and Prejudice reworking.  I got very excited about this book when I realized that it was set in my town (Farmington, New Mexico, for those of you who haven't read the books.  And yes, it really is a real place.  A weird place, but a real one).  So I was pretty excited about reading them.  However, I just couldn't get into Pride & Popularity.  It was a very quick read with a lot covered in a little bit of space.  I had a hard time believing Chloe's parent's would really go that over-top with their daughter's dating habits- going as far as to force her to date someone she wasn't interested in.  I also felt that the novel lacked the build-up required to make the ending conflict with Chloe's sister have a real impact on the reader.  The more time I spent with these characters, the less I was able to really find any common ground with them.  At times it felt like the only thing that was believable was the location of Chloe's home.  It is described as being directly across from a park, and though it never lists which park, it was pretty cool to read this book with an actual location in mind that could very well be the real place.

Having finished Pride & Popularity, I moved onto Northanger Alibi.  I struggled with this one more than the first.  I tried to convince myself that it was due to the numerous Twilight references and (again) the weird dating rules that took place (and again with the forcing of an unwanted relationship) but as I finished the book, I don't think that was it.  I just couldn't stand behind these characters.  They just felt a little flaky.  In Northanger Alibi, Claire (Chloe's sister- and yes, she was in P&P, I've heard complaints that she wasn't) gets the opportunity to visit the Seattle area- and meets two guys that she is convinced are right out of Stephenie Meyer's saga- they clearly are a vampire and a werewolf in disguise!  Even writing it I can't help but roll my eyes.  Again, these books are clearly not for me.

I will say this- there is certainly a market for these books.  I recently attended an author visit with Ms. James.  She read aloud from several of her books, and I was quite surprised that several of the audience members didn't roll off their seats they were laughing so hard.  And laughing with enjoyment.  It was then that I realized that I used to read books similar to James' work quite heavily when I was around the 14-17 age range (the same age as the girls in the audience).  I thought about some of the cheesy plot lines that I thoroughly enjoyed and, though I don't remember them very well, I'm sure they couldn't have been very different from these books.  I've also noticed that my tastes are gradually changing and I have been reading more and more of the adult fiction.  So while I have begun to outgrow these sorts of books, I see that there is demand for it and that there are readers out there who just can't get enough of the genre.  So if you are a teenage girl who is into light and fluffy romances (or a non-teenage girl that is into light and fluffy romances) or are looking for a book that is just clean without major conflict, give this series a shot.