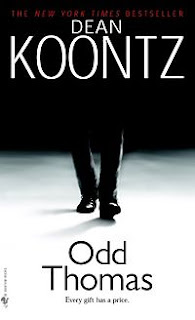 It's not often that I come across a book that makes me cry.  It's even less often that I come across a book that makes me laugh as well as cry.  Dean Koontz's Odd Thomas managed to make me do both.  Odd really is an interesting character.  He's someone that I wish existed in real life.  He works in a diner, has a fairly serious relationship with a woman named Stormy, is friendly with many of the residents in his town, Pico Mundo, including Elvis.  Oh, did I forget to mention, Odd also has the ability to see the dead?  Though they can't speak to one another, Odd is able to use his special sixth sense to aid those that have not fully passed onto the next world.  In the first installment in this series, Odd notices a group of bodachs (spirits that tend to appear when death is imminent) following a man that Odd christens "Fungus Man."  The high number of bodachs leaves Odd to believe that something resulting in many deaths in coming and he is determined to do what he can to stop it.

I had decided that one of the books I would read this year would be something by Koontz.  I am really glad that I chose this book.  There is quite a bit going on in this book (considering the events take place in a little bit more than 24 hours) but Koontz handles it well.  He also is able to juggle the many characters wonderfully.  I have found that as a reader, I often will get confused as to who is who when there are too many characters (or if they don't get enough development).  This was not the case in this book.  I don't think there was a single character that I thought felt out of place or irrelevant to the story.  I could easily picture these characters and thought that would make sense as real people.  I didn't realize just how attached I had become to the characters until the very end (no spoilers, but O...M...G...).  I'm a little nervous about reading the rest of the series since I can't quite imagine them having the same vibe as this novel, but I am more than willing to give them a go.