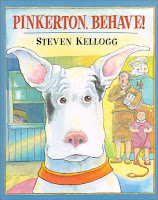 What's not to love about Pinkerton?  In Steven Kellogg's Pinkerton, Behave!, Pinkerton is trying to learn commands that every dog should know such as fetch and come.  However he is struggling with these commands.  It seems that the only answer is to put him in obedience school.  Too bad he flunks out.  When a burglar breaks into the house it is up to Pinkerton to save the day- but will he be able to follow commands to get rid of the burglar?

I read this book because it is on the Banned Books list.  It was "challenged, but retained at the Evanston (IL) Public Library despite complaints that the image of a masked burglar pointing a gun at a woman is too violent for young readers."  I can see the point in this, but I would use this book as an opportunity to talk to the child about gun safety.  Maybe that's just me.  I really enjoyed this book.  I love children's book that make me actually laugh out loud.  This is a great book for a family with a new dog (or about to get one) as the conversation of training comes up.  In a way it's sort of a what-not-to-do, but it is still a lot of fun!