"Mrs. Dole Is Out of Control! (My Weird School Daze #1)" by Dan Gutman 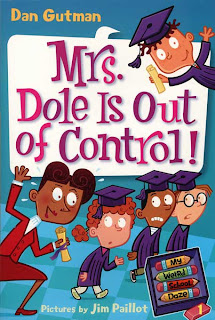 I know Mrs. Dole Is Out of Control! by Dan Gutman and illustrated by  Jim Paillot and other books in the series are crazy popular so therefore  I thought that I would get some enjoyment out of it.  Sadly I found it kind of annoying.  I went into it expecting something silly and fun.  Instead I found a book that I didn't think was that well written and that felt incredibly dumbed down.  I assume that's it's probably not the easiest thing in the world to write for a young reading level, but this book pushed it for me.  I didn't like how A.J. uses the explanation of "nobody knows why" instead of explaining things to the reader.  I also didn't like that there were several common expressions were obviously misheard by A.J. and incorporated into the novel without A.J. learning what the true expression is or what it means.   I felt that if I had read this book as a first or second grader I would have absorbed these and used them wrong (the only time A.J. seems to learn anything was when he misuses the word unique in place of the word antique and his classmates correct him).  Gutman is in the position where he is going to be influencing his readers and is partially responsible for the words they pick up in their vocabulary and I don't think he takes this role very seriously.

I started this book assuming that it would be a fun and light-hearted book but instead I was just disappointed.  I would have a very hard time recommending this book to a child.  I feel strongly that the only one who can decide what a child can and cannot read is their parent.  But if a parent asked me if I would suggest this book for their child I would likely say no.