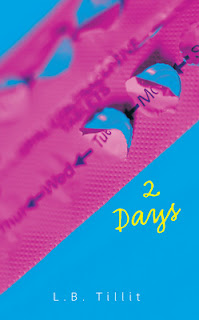 L. B. Tillit's book was lacking direction.  From the cover I assumed it was yet another teen pregnancy book.  Well, it is but it also isn't.  The novel starts with Neema being kicked out of her home when her mother doesn't believe that her sleazy boyfriend did something to Neema (the first page starts out kinda vague, we never fully find out what he did or tried to do to Neema).  She grabs some essentials and moves in with her boyfriend and his family.  Of course she forgets to take her birth control pills for 2 Days, hence the title.  She goes about her life as normal; going to school, working on the weekends, hanging out with Nate, but soon finds herself without anywhere to stay as Nate's parents get tired of her crashing on their couch without contributing to any of the bills.  From there she decides to stay with an aunt.  And soon after realizes that she is pregnant.  In the midst of this, she and Nate break up, her mom finally comes around and dumps her boyfriend, and Neema finds inspiration in Maya Angelou's I Know Why the Caged Bird Sings.

Ok, so I may have spoiled some of the book (sorry) but it just didn't feel like there was a whole lot of meat to this story.  Though it had the workings of a good plot, it felt like there was too much going on and not enough focus on any of the storylines.  It seemed like it floated from one story to the next without any real conflict.  Neema handled her pregnancy very easily and didn't seem to have to struggle in her situation.  She seemed to happily go along even though Nate wanted nothing to do with her or the baby.  She never seemed too worried about how she would afford to by diapers and other essentials or if she was really fit to raise someone.  It came across as though she was playing house.  She has a bit of redemption at the end of the book when she takes her daughter to a party and comes to the realization that this is not the environment for a baby, but it just didn't feel like enough.  In a way this book felt like it was a first draft and needed some guidance with some trimming of plot (and some elaboration with what was left).  I wanted to like this book.  I guess I wouldn't say I disliked it, but there is certainly room for improvement.


Posted by Beauty and the Armageddon