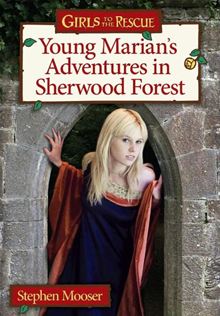 I am not overly familiar with the story of Robin Hood.  I watched the Disney version once as a child and that's about it.  So I can't tell you how Young Marian's Adventures In Sherwood Forest by Stephen Mooser stands up if you are a Robin Hood fan.  I can say that I  did like that the focus of the book is on Maid Marian and that though Robin was present for the majority of the novel, he was not in any way the focus.  It was enjoyable to see Marian take charge and save the day, especially considering this book is set during a time when women often don't get that opportunity.  I didn't feel that this was the best written book, at times it was a little dry and drug out a little, but I could still see the appeal.  It is certainly a book that I would recommend to young girls.

All of the expected characters are featured; Marian, Robin, the Sheriff of Nottingham.  Also as expected, the Sheriff is up to no good  and it is up to Marian to put a stop to it.  Something I have found to be true of most adaptations of popular stories- as a reader, I usually know what to expect out of the story.  Because of this, I had a pretty good idea how the story was going to end (and what the twist would be).  But even so, I did enjoy this book and encourage young girls to give it a try.