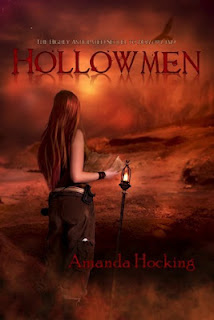 I went into this book with fairly high expectations.  I had read a few reviews for it and found that the majority of them were negative, but that didn't deter my excitement- mainly because a lot of the reviews complained about characters that got killed/zombified.  Well of course characters were going meet a horrible end!  I personally feel that it takes a great writer to be able to kill off their carefully crafted characters.  None of us wanted characters to die in Harry Potter but we all expected it.  So I ignored the reviews and dove right into Amanda Hocking's Hollowmen.  I am sad to say that this novel fell a little flat.

Most of the novel was great.  There was plenty of fear and suspense, scenes that made me squirm with squeamishness (expected from a zombie novel) and what I thought were believable characters and events given the situation.  I was really digging the book until I got to about 97% complete (I do love this feature of the Kindle).  At that moment I realized that I wasn't going to like the ending.  I knew that there was not enough time to give the novel the kind of ending that I thought it deserved.  As much as I loved the majority of the book, the ending caused my entire rating to go down.  I could probably re-read this book, as long as I skipped the last chapter and pretended that something much more eventful and amazing took place instead.  It felt like Hocking had a deadline that she just wasn't going to be able to meet, so she quickly came up with a "happily ever after" that left a few too many lose ends for my taste.

After facing horrible experiments in the quarantine, Remy finally is on her way to once again reunite with her brother Max.  Like Hollowland, she uses what little resources are available to defend herself and those around her from the hordes of zombies.  I have to commend Hocking for her ability to make a story that focuses quite a bit on characters travelling from one location to another not seem horribly boring.  Remy is a strong character that I can easily look up to.  She does whatever she possibly can to protect those around her and spends little time focusing on her own needs before the needs of others.  She is a character I can easily get behind.

I'm not sure where I stand on recommending this book.  I wanted to love it.  I almost loved it.  Had there just been a little more focus on the ending I would have loved it.  It would be a little easier to recommend if Hollowland was $2.99 and Hollowmen was the free novel, but as that is not the case I guess it is up to all of you to decide if you will like this book or not.