"I Am Number Four" by Pittacus Lore 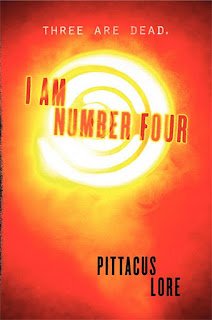 Here I go jumping into yet another series.  Since starting this blog I have been working on expanding on the types of books that I read so I decided to give Pittacus Lore’s I am Number Four a try.  Just like many other alien stories, Number Four comes to Earth thanks to problems on his home planet. Number Four (or John Smith, the name he is currently using) has been on the run since his arrival on our planet when he the nine other members of the Garde escapade their home planet of Lorien during a Mogadorian attack.  Along with his Cêpan, Henri (his guardian and the one that will teach him to use and control his special powers called Legacies) John moves from one city to another when it seems like the Mogadorians might be getting close.


The novel opens with the third Lorien being killed.  When the scar appears on John signifying that another Lorien has died, he knows that he is next.  He is number four.  John and Henri load up and move to a small town in Ohio.  Once there, he finds something that has been lacking in the other places he has lived- close friends.  As everyone can guess, John will eventually be in a situation that reveals that there is something different about him and it won’t be too long until the Mogdorians seek him out.


Even though I don’t have too much experience with the science fiction genre, I felt that this book was a little predicable.  From early on I had a pretty good idea how certain characters were going to develop and what “surprises” would be revealed.  I am currently reading The Power of Six and enjoying it, but I have a feeling I won’t be attended any midnight premiers in anticipation of the next sequel.  However, I found this to be a fairly fast-paced read with plenty of action and excitement.  If you are into books about teenage aliens hiding on Earth and pretending to be human, then this series is for you!