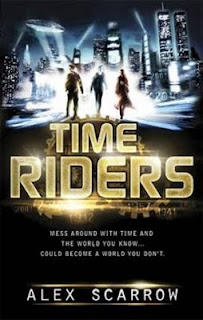 I could not put this book down! Timeriders

by Alex Scarrow follows three teens that were barely rescued from death (Liam was saved from the Titanic in 1912, Maddy from a plane crash in 2010 and Sal from a fire in 2026) and brought to Manhattan in 2001. They then discover that they are now part of a secret organization called The Agency and are assigned with the task of keeping the world safe from time travel. Each has an assigned task: Maddy, the team leader takes care of all computer tasks, Sal's job is to monitor daily events, taking care to note any changes sparked by time travel, and Liam is sent back in time to resolve any changes made by time travelers. The Agency is housed in an archway in New York City which exists in a time bubble, where the three relive the days of September 10 and September 11. Sal ventures around the city daily, noting a woman who picks up her child's toy, the various advertisements for Shrek

During a training exercise, Liam is taken back to Dallas, Texas where he encounters Lee Harvey Oswald and prevents the assassination of John F. Kennedy. By doing so, Sal notices changes in 2001 and Maddy's research concludes that Kennedy survived leading to further space advances. However, back in 1963, history is once again altered as another assassin takes the president's life and the future changes back.

During her daily walk, Sal avoids making eye contact with the Twin Towers, as she has seen the attack and lived through the events more than she can bear. But it never comes. She looks up to find that New York has completely changed. Cars have suddenly become old fashioned and cell phone ads have disappeared. The team quickly discovers that the past has changed and Germany won World War II. Liam and support unit Bob travel back Washington D.C. 1956 and find themselves in the middle of a Nazi invasion on the White House. The plot continues with the two sets of Agency members trying to help each other across the timeline and get everything back to the way it should be.

I picked up this book because it involves several areas of history that have always interested me (the Titanic and WWII among others). I read it quickly over two nights and was completely absorbed in the book. Fans of history and science fiction will likely be engulfed in this fast paced read. I felt that the various historical elements were well researched and that the characters and their experiences were believable. I am very much looking forward to reading the rest of the books (nine total are planned).