Three years after Emma Sloane's wealthy fiance's mysterious death, she's finally ready to move on and pursue her own dreams. But her plans are derailed when she's attacked outside her New York City apartment in what she thinks is a random violent incident. Then other women who look just like her start turning up dead...

Homicide Detective Jake Quinn is haunted by the one case he couldn't solve. When he's put in charge of a new high-profile murder case, he interviews a victim who escaped a similar attack—and to his shock it's Emma, the former fiancée of his unsolved murder victim.

Neither expects the sparks of attraction between them. But the killer escalates, clearly targeting Emma, and Jake's job is on the line. Can he solve this case before it's too late for both of them?


I wasn't quite the target audience for Dawn Altieri’s Dangerous Desires. I have enjoyed some novels that feature the murder, mystery and a sexy detective/police officer element, but this read confirmed that my reading preference is the type of novels that are more about the humor than the suspense and romance. However, I do not regret reading this novel.

Emma and Jake are very interesting characters with complicated chemistry. The mystery was engaging throughout and the plot felt relevant to life today. There were moments where I felt very nervous, waiting for our heroes to save the day. Overall, this is a very well written book, but the content was a little to intense for my personal preferences. While I favor novels that don’t raise my blood pressure, I definitely see the appeal. Reader’s that enjoy being on the edge of their seat throughout a novel will certainly want to check this book out!

A lifelong resident of northern New Jersey, Dawn Altieri has been scribbling stories practically since birth. After reaching a milestone birthday (she won't say which one), she figured it was about time she took a shot at writing professionally.
With an overactive imagination and a slightly twisted mind, she enjoys reading dark and dangerous tales almost as much as writing them. When she's not curled up on the sofa with her laptop, her latest story, a box of chocolates and a cup of tea (or a glass of wine, depending on the time of day), she can be found volunteering in the world of animal rescue. To keep a roof over her head, she works in the printing industry as a graphic production artist. She shares her home with her husband and daughter, and a menagerie of rescued fur-babies.
Website * Facebook * Twitter * Instagram * Bookbub * Amazon * Goodreads 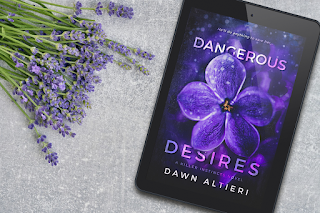