Meet Tashera, The Main Character from "Accused" by Yasmin Shiraz 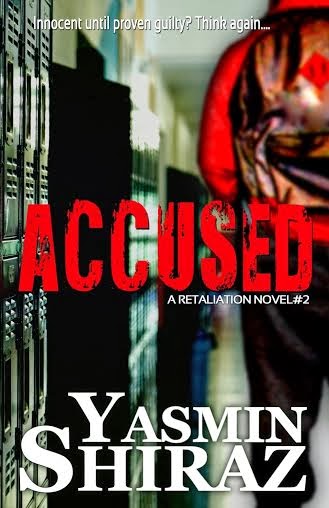 Meet Tashera
The Main Character from Accused by Yasmin Shiraz


My name is Tashera Odom. I'm a freshman at Georgia Atlantic University.  During my last year in high school, I was attacked by three girls that I didn't know. I was in the hospital and everything. It was the ABSOLUTE worst! There was press coverage, some of it was put in the book, Retaliation. But anyway, I got over it. I don't know how really. I guess my boyfriend, Ahmed, helped me. Well, after going through that, I decided that I wanted to leave Washington, DC. That's where I grew up. So, my boyfriend and I both got accepted into this school in Georgia and now we're here as freshman.


Everything seemed fine, until I joined this young women's support group. See, since I was attacked, sometimes, I get angry, and frustrated. People say that I suffer from Post Traumatic Stress Disorder. I don't know about that. I just walk around pissed off sometimes. Well, anyway, since joining this group, I've noticed that a lot girls on campus have been getting drugged and raped. I thought getting jumped was bad but I think this is worse.  The girls can't remember what happened to them. It's like somebody wiped away their memory or something. Some real 'caught up in the Matrix' type stuff.


If I were to tell you something about myself, I would say these three things:
1. When someone takes something away from you, it changes you.  In my case, I was beat up for no reason and it forced me to see people differently. There are real cold people in this world.


2. I don't believe that any ONE person wears a cape. I believe we all wear capes. When I was beaten last year, no one came to that empty lot to save me.  And, because of that I know that I want to do more to wear a cape for myself and help others find their capes.


3. I believe everyone must try harder. If you don't like a situation or circumstance, you gotta find a way to change it. I made the mistake of thinking that my mom could solve all my problems, but you know what? I had to learn to solve some of my problems for myself. So, I now consider myself a problem solver.


Now, you know something about me.