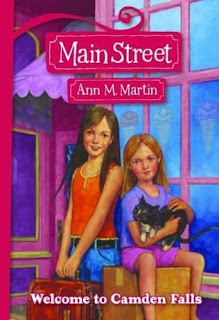 For some reason I just didn't get into this series when it first came out. Pretty sure part of the reason is that it came out as I was making the transition from less juvenile books to more young adult books. Thankfully I have since come to my senses and can read just about anything now. Welcome to Camden Falls has a lot of charm and I was surprised at how strong the characters and the plot are.

Flora and Ruby are moving to Camden Falls to live with their grandmother after their parents are killed in a car accident. They are about to start their new lives in a new town. They spend their days in their grandmother's sewing store, Needle and Thread and making new friends, particularly with a neighbor named Olivia. The focus of the book is on these girls, with a few chapters from the point of view of Nikki, a girl whose family is very poor which in part is responsible for her lack of friends. The book also spends some time with several of Flora and Ruby's new neighbors and in doing so gives us insight into their lives in a way that I really hope we see more of these characters in the later books in this series as Martin sets up what could be some very interesting plot lines.

I liked this book and the characters quite a bit. Though the setting itself is rather calm, there is more conflict than I expected and can tell that there is a lot of potential for this to be a strong series. I am curious though, since it is a rather short series (by BSC standards anyway) I hope that there are enough books to cover all of the plots that are suggested in the first book. I will certainly be finishing this series!