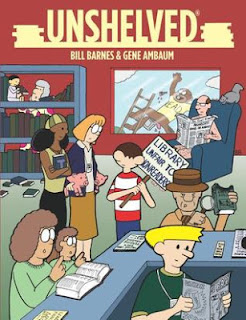 If you have ever worked in a library then this is the book for you!  Unshelved by Bill Barnes and Gene Ambaum follows the staff at the Mallville Public Library and the crazy scenarios they encounter.  I can't help but feel that this book will only appeal to those that have worked in libraries or to those that have spent a lot of time in the stacks at their local library.  Having personally been asked where an unfindable book is ('it has a green cover!') I could relate to these comic strips so easily but do wonder if the jokes would be lost on most people.  Characters include: Dewey- who would much rather be enjoying a coffee break than assisting patrons, Merv- a teenage who's always at the library though he's not a fan of reading, Tamara- the children's librarian, and Mel- who tries to maintain the chaos that is the library (with little success).  The book is a collection of comic strips that have been featured on the Unshelved website.  I wasn't sure if I would enjoy these comics, but once I started reading I just didn't want to stop.  In some ways, it felt like a book full of inside jokes since I knew they wouldn't appeal to everyone, but that there would be people (like me) who would have to take breaks they were laughing so hard.  I am really interested to find out what others think of Dewey and the gang- do you enjoy these comics or are they more for librarians and the library-obsessed?  Let me know in the comments!