"Anna and the Franch Kiss" by Stephanie Perkins 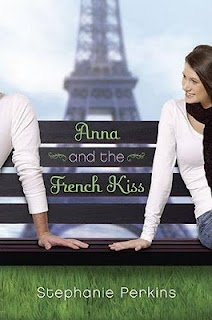 It seemed that every other book blogger on the face of the planet was absolutely raving about Anna and the French Kiss by Stephanie Perkins so of course I had to read it.  Now, don’t get me wrong, I enjoyed the heck out of this book but at the same time I didn’t feel that it was as amazing as I expected it to be.  I suppose I was expecting the Harry Potter of teen romance?  Despite the book not quite meeting my expectation, it was still a really fun read!

Anna is about to start her senior year of high school in the most romantic city in the world- and she isn’t too thrilled about it.  She has no desire to leave her best friend or Toph (her co-worker and crush/almost boyfriend) and she doesn’t know a word of French.  But her father has sent her to Paris anyway.  It takes some time, but Anna starts to make friends in this new city.  And more importantly she meets Étienne St. Clair, the most wonderful British/American guy in France who conveniently has a girlfriend.  Anyone that has ever read a book or seen a movie with a romantic plot immediately knows that Anna is eventually going to fall for St. Clair, it’s just a matter of time.  Just like in a Taylor Swift song, Anna and St. Clair become extremely close but because Anna knows he has a girlfriend, there is nothing she can do about it.  The reader spends the majority of the book waiting for St. Clair to break-up with Ellie (sadly a name I love was given to a rather unpleasant character) and to get together with Anna.  But will that ever happen (don’t worry, I won’t spoil it for you).  Another element of this book that is fairly important is Anna’s love of cinema.  Back in her hometown of Atlanta, she worked in a movie theatre and dreamed of being a professional movie reviewer.  In Paris she discovers that the city shares her love and spends a good portion of her evening soaking up the flickering lights of the big screen.  I felt that Anna was a well developed character and enjoyed that her likes and interests where an important part of the story.

This book felt very familiar.  There was nothing horribly surprising about it and it deals with themes extremely common in YA literature.  However, I fell that it is well written and well researched.  As I was reading it, I felt that the characters and their actions where believable.  Overall I really enjoyed this book and felt that it would be perfect read for a lazy afternoon.

You can expect my review of Perkins’ companion book, Lola and the BoyNext Door within a few days (I am loving it!).