I recently had the opportunity to interview Interview with Meredith Zeitlin, author of Freshman Year & Other Unnatural Disasters.  I will be reviewing this book soon! 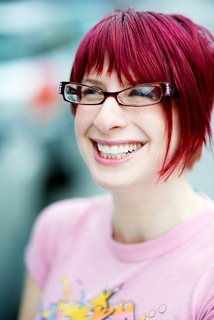 What keeps you motivated to write? Well, since I'm the world's biggest procrastinator, that's a tough one. But ultimately, I love books, and I have my whole life - I'm so grateful to the incredible authors whose work I enjoy so much. The thought of giving a single kid a book that she can relate to, that makes her laugh, that makes her think, or makes her feel like she isn't the only one in the world with impossible parents and no idea what she's doing... that would be an incredible thing. And it's a heck of a motivation.

Is there a place that inspires your writing? I never really thought about that, to be honest. I usually write on my couch, in my living room. It's got a ton of big windows, so it's nice and sunny during the day. I love to write outside when I can; while I was working on one of the many drafts of Freshman Year... I worked by the pool of the fabulous Roosevelt Hotel in LA. And this summer I plan to do lots of work outside at the beach house I'm sharing with friends. So I guess there isn't a specific place, but a feel of a place - bright, sunny, relaxing.

Do you listen to certain music when writing?  What do you listen to? I often have the TV on - reruns of Law and Order are the best, because they keep my brain distracted a little bit, but not TOO much. But when I'm really buckling down and getting serious, I always have to listen to the Once On This Island cast album. It's a musical written by Ahrens and Flaherty loosely based on The Little Mermaid story - thought that isn't why I listen to it. There isn't any reason in particular; I started writing to it when I was in college and it's just my go-to. Not necessarily my favorite show - just my special writing music. The best part is realizing the last track is ending and getting to look back and see how much I've done during that pass of the album. It's a good way to break up writing sessions as well.

What is your process for writing a book? My process... is no process. (i'm probably not supposed to admit that, right? Oops!) When I started Freshman Year..., I literally came home one afternoon, sat down in my living room and wrote the first sentence of the book – the same first sentence that you'll see in the finished version. I wrote a few pages and closed the computer. Then I watched a bunch of TV and ate some ice cream and thought: “I should really work on that some more.” Then the Procrastination Monster and I did everything BUT write for a while. And that was how the book got written, over about six months. When inspiration struck, I'd write something – for five minutes, or thirty – and then I'd do something else.

I specifically remember when I realized I had an actual book; I was sort of shocked. This was the first major writing project I'd actually seen all the way through, and it was scary! Did I have to do something with it now? If so, what? I recently started a new book, and so far I'm doing it the same way. A few pages here, a paragraph there. I probably should be outlining or a setting a schedule for myself, but I guess if it ain't broke...


Oooh, I'm always reading lots of different things. The Reader, by Bernhard Schlink is on my nightstand. Also The Jewel of Medina by Sherry Jones - that's my current subway book. I started The Maze Runner, but I accidentally skipped to the end (a terrible habit of mine - I hate waiting to find out what happens! - so I might jump to the sequel. And finally, I have an ongoing project where I've been rereading the entire original Nancy Drew series, in order. It's been fascinating to reread the books I adored as a kid from the perspective of an adult - not to mention 2012. I"m going to blog about that when I'm done.

Thanks again for having me!!