"Anne Frank and Me" by Cherie Bennett & Jeff Gottesfeld 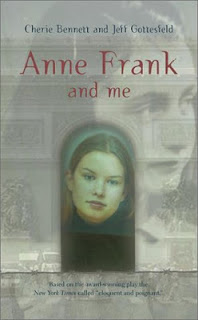 While preparing to write this review, I was surprised by the negativity of  the editorial reviews and the overwhelmingly high number of positive reviews from readers.  This is a work of fiction and should be read as such.  It is not meant to be a biography of Anne Frank nor should it be read for that reason.  It is purely the story of a fictional person living through events that took place in real life (just like many, many other books).

Anne Frank and Me by Cherie Bennett & Jeff Gottesfeld focuses on a teenage girl named Nicole.  The book begins with Nicole shirking off school assignments (both in school and out) in favor of daydreaming about the boy of her dreams, Jack, and developing her website, Notes from Girl X.  It is clear that Nicole is intelligent, but often wants to take the easy way out.  Instead of reading The Diary of Anne Frank for class, she visits various websites, stumbling across one arguing that the diary was not written by the teen during the Holocaust, but is instead a work of fiction.  Nicole and her sister begin to question why she would be required to read a "fake."

The next day, Nicole's class visits the traveling exhibit, Anne Frank in the World and her life turns upside down.  When shots ring out and her classmates being to panic, Nicole is caught in the mob of people and blacks out.  When she wakes up, she is no longer in modern day America, but is now a Jewish girl living in occupied Paris, France.  Convinced she is an American from the future, but with no way to get back, Nicole suddenly must figure out how to survive the Nazi occupation.  More than once she finds her life in grave danger and begins a journey that will change her forever.

I have read this book many times.  Every time, I cannot put it down until I have read it cover to cover.  I find it engaging, gut wrenching, and inspiring.  It is a very powerful book and once you've read it, you won't soon forget it.