"From Sketch to Chapter Art, an Illustrator at Work" from Guest Blogger Richard Due 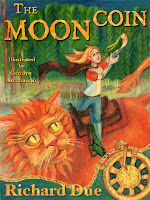 For me, getting to work with Carolyn Arcabascio was a dream come true. On The Moon Coin, we worked from a master list of scene options, with Carolyn picking out scenes she liked and making sketches. For the prologue, Carolyn drafted three options. All three were great, but two in particular were spectacular. I first went with option 3 (one of my scene suggestions). I think we spent more time on this sketch and subsequent color drawing than on any other piece. But it never seemed right. At the eleventh hour, I asked Carolyn how hard she’d hit me if I suggested scrapping the thing and instead going with the pinky promise scene you see below (one of her scene suggestions).  Carolyn responded: "There would be no hitting involved!" and told me it wouldn't be a problem. You sure can't ask for better than that.

From the Prologue: Bedtime Tales.

Richard: Did you make all these sketches in the same location, Carolyn?
Carolyn: Yes, I do all of my work at a drafting table that's situated in a little nook of my apartment in Acton, Massachusetts. There's a bookshelf to my right and a wall of "inspiration" to my left, where I hang prints of other artists' and illustrators' work. On either side of my drafting table are drawers of supplies, and stacks of sketchbooks and old paintings. The drafting table faces a window overlooking a quiet street and the woods beyond it.

From Chapter Two: A Coin of the Realm.

Richard: Do you use models when you're sketching?
Carolyn: I use a combination of models and photo references. If I need to work out the nuances of a character's posture and really understand the perspective of it, I'll ask whatever friend or family member is handy to pose for a sketch. Often, I'll get into the position myself or mimic the facial expression I want to portray in order to get the feel of it. And sometimes, if there's a character being portrayed multiple times across scenes, I'll make a rough model of their head out of clay so I'll have it to refer to.

From Chapter Four: To Barreth.

Richard: When drawing fantastical creatures, do you use bits and pieces of real animals for
inspiration, or have you actually seen a wirtle and you're just not telling us? ;)
Carolyn: No wirtles native to Massachusetts, fortunately! When figuring out the look of fantastical creatures, I use photo references of different animals to understand the way the anatomy might work, and then combine features as I see fit and as the story calls for. To understand the wirtle's legs and paws, for example, I referred to a series of photographs of show dogs leaping over hurdles. The severely arched, scruffy back was influenced by photos of hyenas on the prowl. The bone-structure of the face ended up being something of a cross between a cow and a warthog, and I wanted the snout to be bare—kind of gross and raw-looking. Add it all up and, voila! We have a wirtle.

The Moon Coin, by Richard Due, is available at Amazon, Barnes & Noble, and the iBookstore for $2.99.

Copyright © 2011 by Richard Due. All rights reserved.

Gibbering Gnome Press, A Division of Ingenious Inventions Run Amok, Ink™
The Moon Realm™
Posted by Beauty and the Armageddon

Email ThisBlogThis!Share to TwitterShare to FacebookShare to Pinterest
Labels: Carolyn Arcabascio, Guest Blogger, Richard Due, The Moon Coin, The Moon of the Realm